The latest real-time strategy - Conflict of Nations: World War III is the work of the studio responsible for such titles as Call of War and Supremacy 1914. As a player we land at the head of one of the countries on the brink of the Third World War. The ultimate goal of the game is to control as much territory as possible, which will give us a certain number of Victory Points that will give us a win in a given round. And there's a lot to conquer - the whole globe.

Just after creating a new account, we have the option to join an existing game or, after acheiving certain level, set up our own game that others can join to. All games are split according to the player's preferred language - communication with other players will have a key impact on diplomacy or other tactics. More than 28 players can join each game. The whole game is preceded by a tutorial, which will certainly make it easier to read the details of the game. At the same time - the old strategy game players will easily find themselves in the new reality. 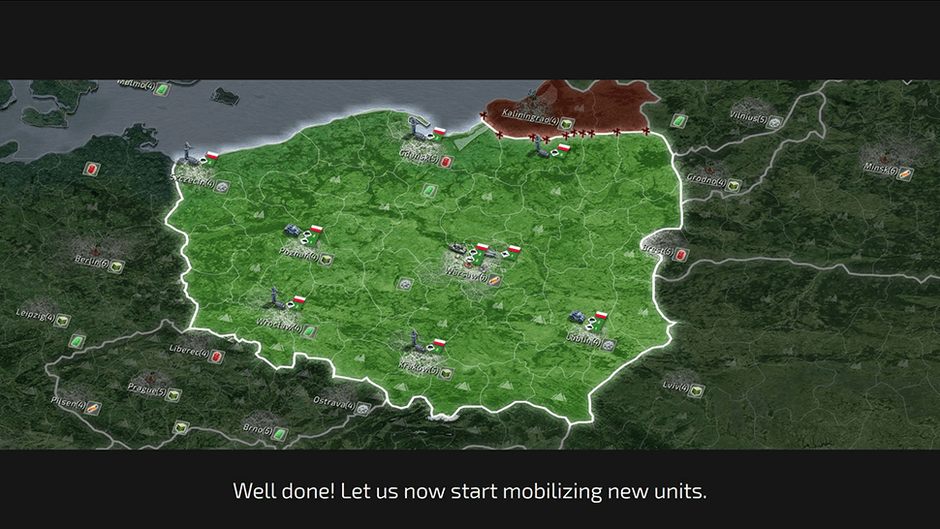 Shortly after joining the game, all that remains it to stand at the helm of one of the nations and start. Unlike other similar titles such as Call of War and New World Empires, where the battlefield was only one of the continents, the Conflict of Nations map of the game world is really huge (all the continents), and the whole game world is divided into zones correlating with the countires of the real world. All countries that are not occupied by players are under the control of artificial intelligence. Choosing where to start the game is extremely important because it will affect not only the number of cities that the player will control at the beginning of the game, but also how close he will find his allies or enemies. 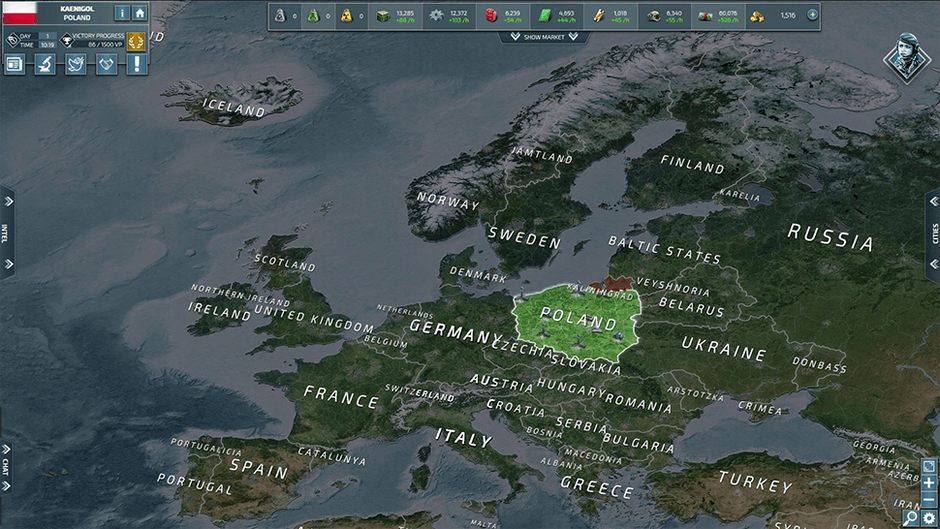 Each player has quite a lot of responsibilities on his / her head - we have to take care of our cities, gathering resources and taking care of morale. Do not forget to expand your cities, as well as to train the new land, air and sea units. Another crucial thing will also be the exploration of the new technologies to strengthen existing units, and unlock new types of vehicles, and units themselves. Proper planning - when and what action to take, will be the key to victory. Mainly because any action taken, such as building new objects, recruiting units or moving them around the world map can take up to a few dozen real-time hours. It is important to draw attention to how many days have passed since the beginning of the game in which we join, because our opponents may be too big of an advantage alrady. 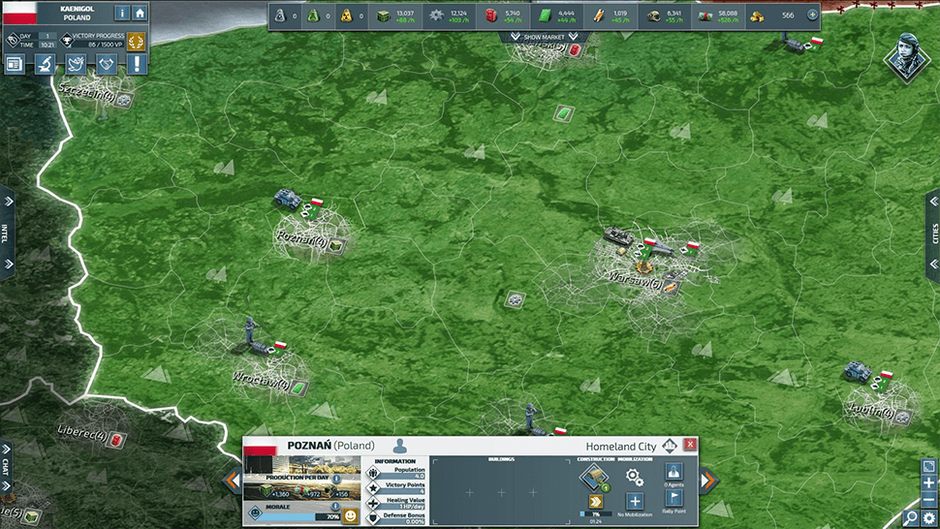 The in-game days are very important when developing new technology. We can observe it when checking the technology tree, which is divided into many categories and branches such as infantry, armor, support, aviation, rockets, etc. While developing a specific improvement takes several hours, unlocking it is only possible after a specific number of actual days in the game, so to be able to reach the best of the improvements - we will have to be patient. 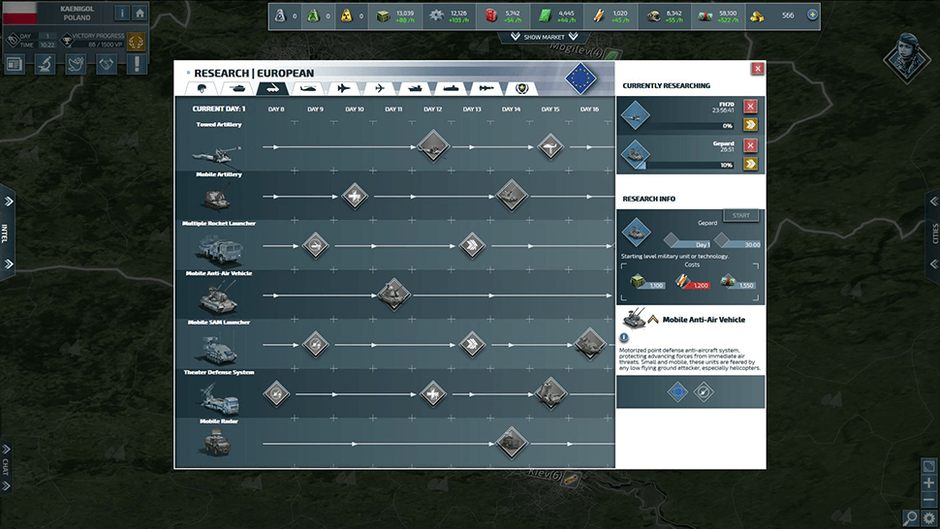 The battles in the game are automatic. All you have to do is to order thee selected units to march to the indicated point, which will start the fight as soon as the army reaches their destination. The outcome of the fight is influenced by a multitude of components such as morale, strength of units, their type, and even the type of terrain. It is therefore worthwhile to pay special attention to the attacked area in order to properly plan an attack. 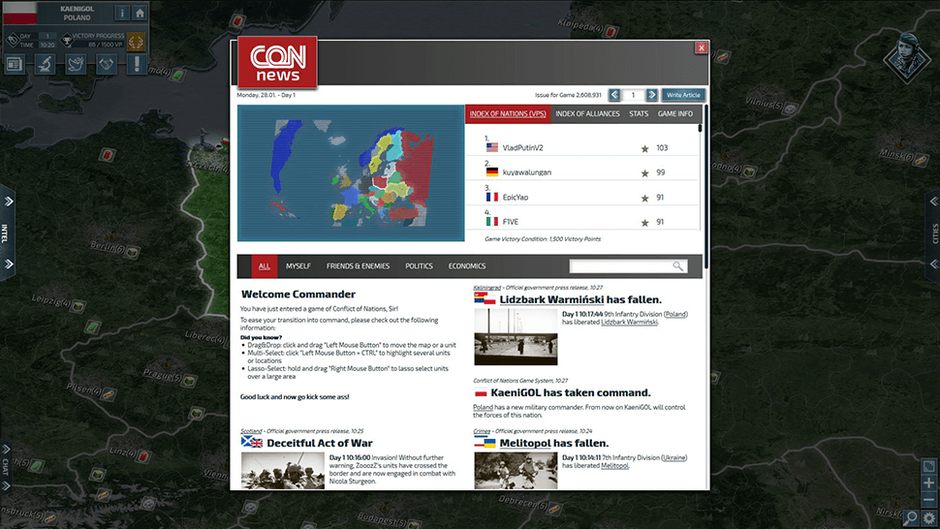 The most distinctive feature of this game is the politics and diplomacy berween the players themselves. It is extremely important to conduct appropriate negotiations with other players and take care of common interests. If one of the neighbors is proposing an alliance, then it is our job to think about whether such cooperation will benefit us or if only one party will benefit from it. It is important to negotiate terms of cooperation. On the other hand we can also plan a joint attack on another neighbor. The possibilities are endless and it is the players who make up their own script for the game world. If you want to get information about other players - just visit the scoreboard and make your own conclusions, or send spies to get as much information as possible, or even sabotage your actions. 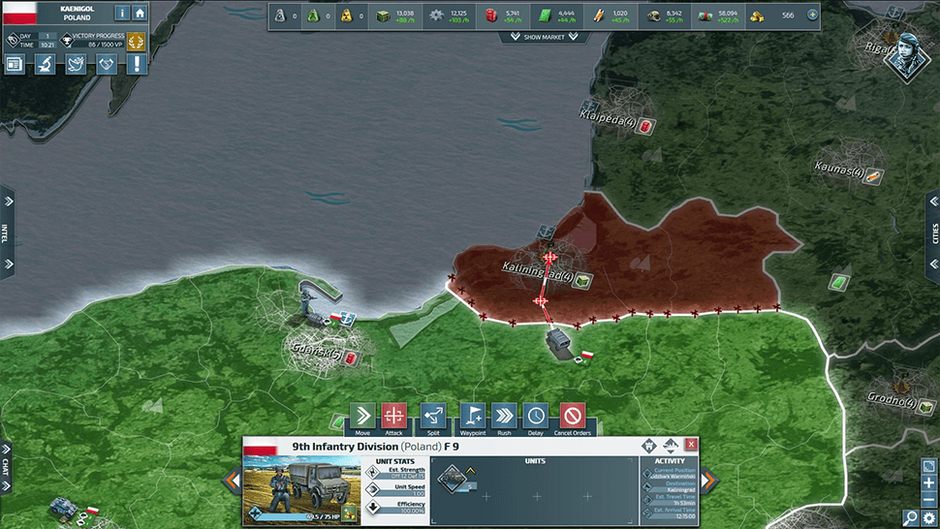 With more than 28 opponents, winning Conflict of Nations is a real challenge. Who is the closest to winning the game? At what cost? Are we able to achieve easy alliances in neighboring countries, or will our efforts soon be doomed by a massive attack of enemies? Will we be able to predict this with spies and prepare a plan of defense quickly enough? Those are the elements that make up the uniqueness of this title. 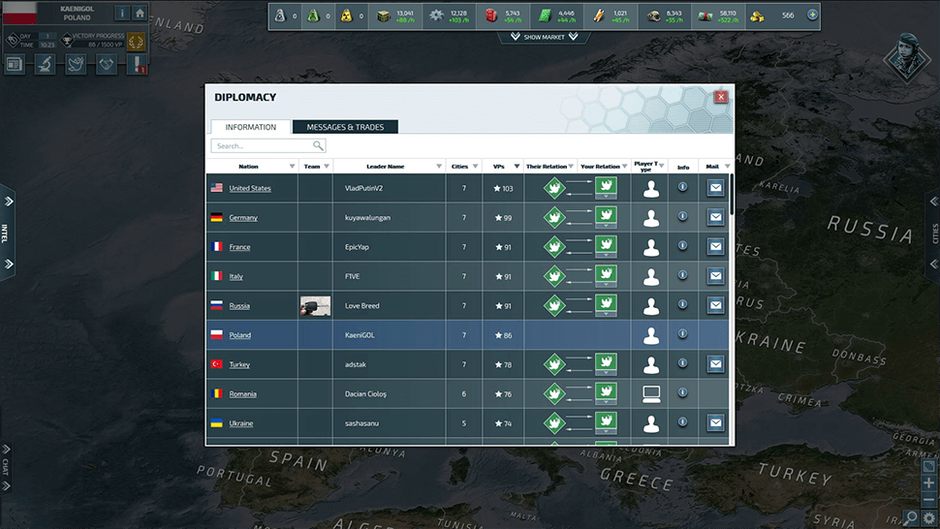 It is worth to mention the premium currency in this game, which is gold, which of course can be obtained in the game itself, but most often and the fastest way to obtain it is by purchasing it with real money. Gold can be used to replenish lost resources, speed up the construction of new facilities, or develop new technologies. In addition, you can also purchase an upgrade to a VIP account that passively allocates part of the aforementioned benefits. Fortunately, thanks to the technology development constraints (the game days), premium players will not gain as much advantage over others as it might seem. 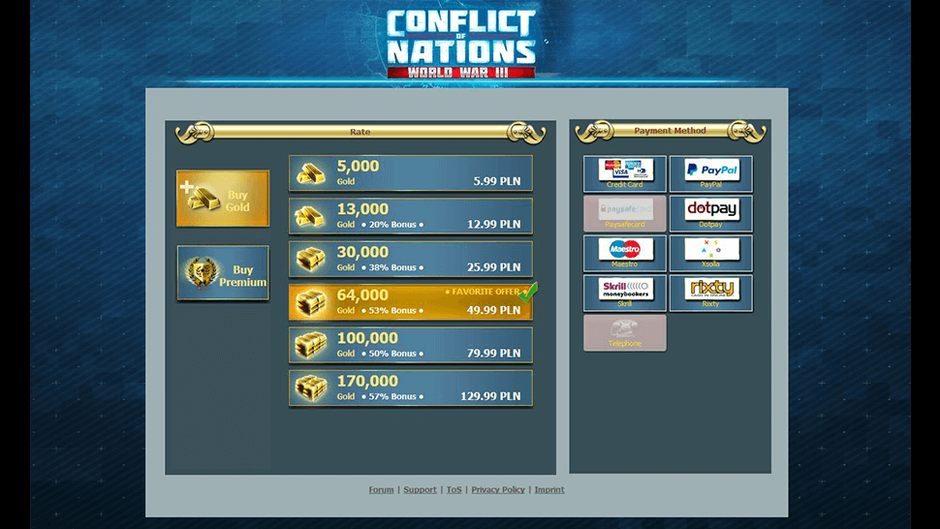 Conflict of Nations is definitely one of the most exciting free to play strategy titles. The level of complexiti will allow you to delve into this title for hours, even if you're one of the most demanding fans of this genre, especially thanks to the extremely important element of diplomacy, which distinguishes this title. And thanks to the scale of the world, each player has a lot of room for maneuver in the taken actions. Moreover, the presence of a premium currency, which certainly provides some kind of advantage - with a properly implemented strategy, will not be a problem for a skilled strategist.

Here are some tips that will get you started early in the game: