The Old West is full of dinosaurs! This is the world of Dino Storm – a free MMO that presents the players with great possibilities. You can build mines, recruit comrades to your camp, catch bandits and complete dozens of diverse quests. There’s more – the game runs in a browser, so you don’t have to worry about downloading anything!

ou begin with nothing. Almost literally. You only have one dinosaur, a gun, a few golden coins and a hat on your head – just like a real gunslinger (save for the dinosaur, perhaps). Before you will be able to build mines and fight outlaws, you will need to complete a few training missions. After you learn the basics, the real adventure will begin. 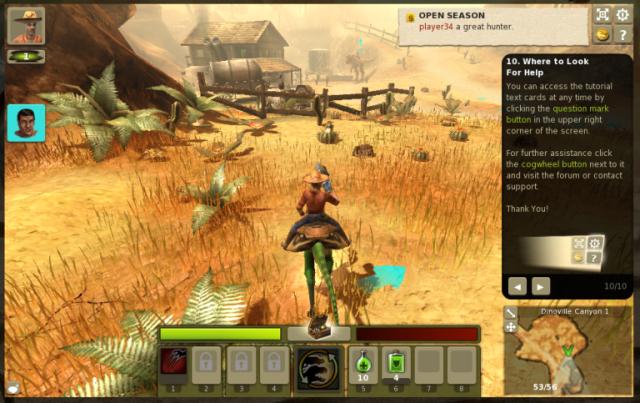 Dino Storm is a relatively complex action game, so not only the level and equipment of your character are important – equally significant are the implants and skills of your dino. You can also improve the level of your weapons by using additional modules. There are many different combinations and solutions, so it’s only up to your creativity to find the right path for your avatar in the world of Dino Storm. Additionally, you can further upgrade your characters by investing real money in the Gold Coins – an equivalent of a premium account. 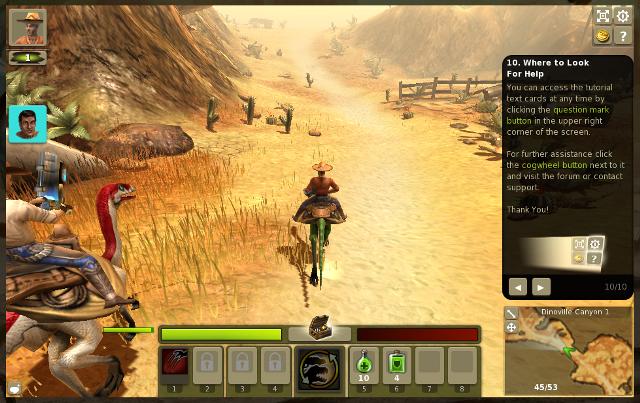 The intuitive interface allows you to control the game with just the mouse. The Diablo-series- style shortcuts bar is a great solution, which works fine even without using the keyboard. On top of that, most elements of the HUD can be turned off, which will allow you to fully immerge in the graphics. Combat is really simple, too – just point the enemy with your mouse and press left mouse button to execute the given command, and your character shall soon defeat the enemy. 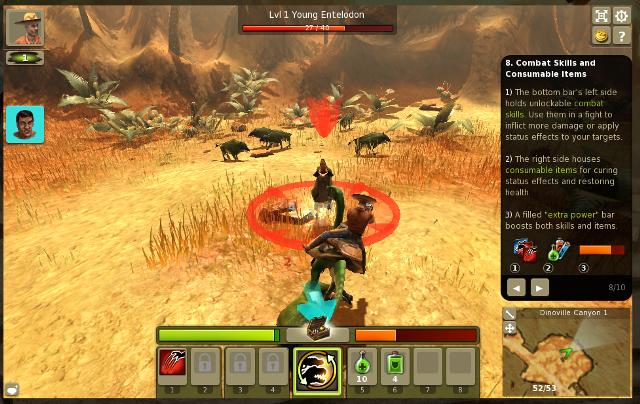 A characteristic feature of Dino Storm is the game world – pretty vast for the standards of browser action games. Even though most of the time the landscape consists of golden sands and the faraway hills in the background, the vistas are diverse and the graphics are really easy on the eyes. Dino Storm runs on the Unity engine, so the only requirement the game has is downloading the right plug-in. 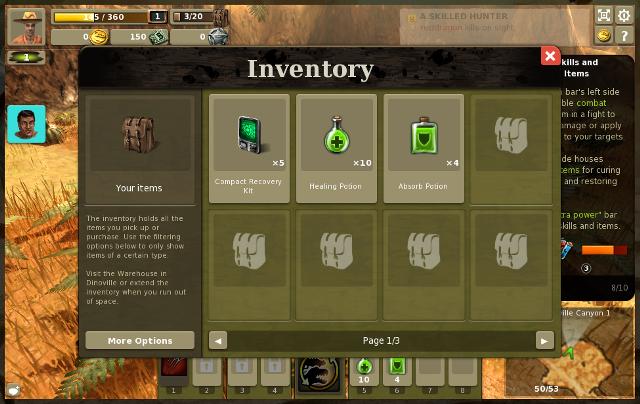 From time to time, you will also have to leave the battlefield and pay a visit to one of the local cities to rearm and resupply. The cities look even better and a soundtrack that perfectly fits the scenery is always playing in the background. You should also check out the Dino Storm forums, where you can set up a friendly game with other players and find many interesting facts about the gameplay.