Only warriors leave the arena alive! Fight for honor and glory.

A browser MMO game that takes place in ancient times and pictures gladiators, battles and arenas.

Gladiatus is a MMORPG fully based on a web browser. The game is free to play and allows players to experience it without making them pay for anything. It has been created by a German company Gameforge AG, which has such games as BattleKnight and Vendetta in their portfolio. In Gladiatus we enter ancient times and we become a gladiator fighting many dangers. We battle other players on various arenas thus gaining experience, we embark on long journeys and travel through fantasy lands fighting with monsters such as minotaurs or dragons. 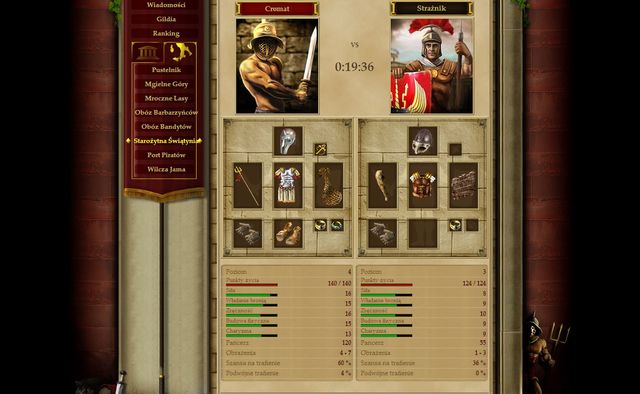 By defeating enemies we become stronger. But it is also worthwhile to take on a job that ensures a steady cashflow and increases statistics. In the taverns we can take quests from other characters – completing those quests helps to upgrade our hero. Upgrading can be also done through regular training, if we choose not to spend time by doing other things. 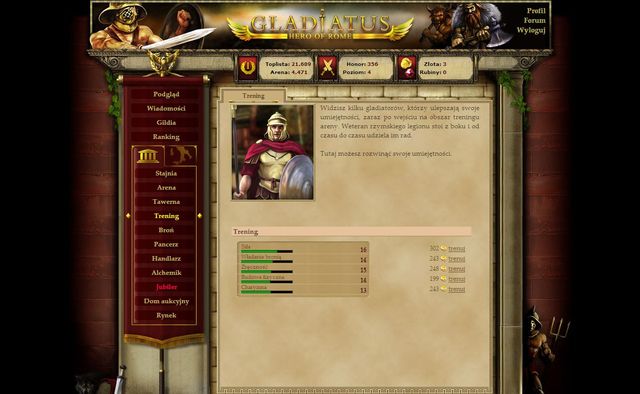 Statistics and skills aren't the only thing that take part in our success. If we want to win all fights, we need to equip our character with powerful items (which can be obtained thanks to all the money we've been making). It is important to manage your money in a clever way: not only do we need a powerful weapon, but also an armor that protects us from enemy attacks. The equipment consists of basic items such as a helmet, shield, armor, shoes and gloves. It is wise to use the services of an alchemist, who can equip us with powerful rings, amulets and powders, that temporarily boost some statistics. You might want to use them before a fight with a strong opponent, who could defeat us during our „normal mode”. In order to look for equipment you have to get to know the local settlement and visit some merchants. Fortunately, the developers weren't very strict with ancient realism and allowed warriors to travel freely. There is no problem in going to adjacent locations, which are crawling with enemies. Fighting them is a great source of money and experience, which allow us to level up quickly. Another place that should be visited often, is a local tavern. It is a source of various missions (on three difficulty levels: easy, medium and hard), that have us exploring certain areas, acquiring objects and items and talking do NPCs. A successful completion of a mission means some gold, items and experience points for our character. Higher levels require more money to be spend, therefore you need to think how to progress your warrior. You could steadily level up in all attributes, but perhaps it would be wiser to make one thing a strong feature of your character? 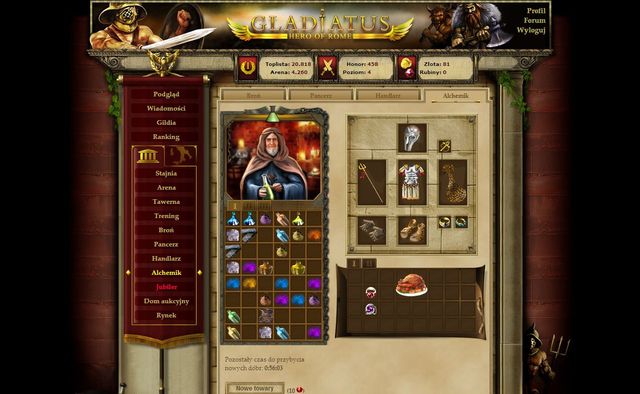 Money are important in Gladiatus – you can make them not only by taking on missions, but also by selling our equipment. That can be done on the market, where we can find other items being sold by other players. The game also sells random items on auctions. If you do not want to play alone, you can become a member of a guild – that way we can declare war on other similar organizations and win some gold in the process. Using that extra cash you can expand your building and become even more powerful.