Let's Hunt is an online browser game in which you play as a hunter and your task is to hunt various animal species. The game features a rather realistic damage system as well as good graphics.

After creating an account, you are thrown right into deep end because the game has no introduction or cut-scenes – you can (and have to) start playing immediately. However, the first few missions serve as a tutorial that explains the game's mechanics – weapon choice, how to shoot accurately and hit animals' vulnerable points or how to use special items that make the gameplay a little bit easier. Everyone should be able to handle the game after a dozen of minutes. 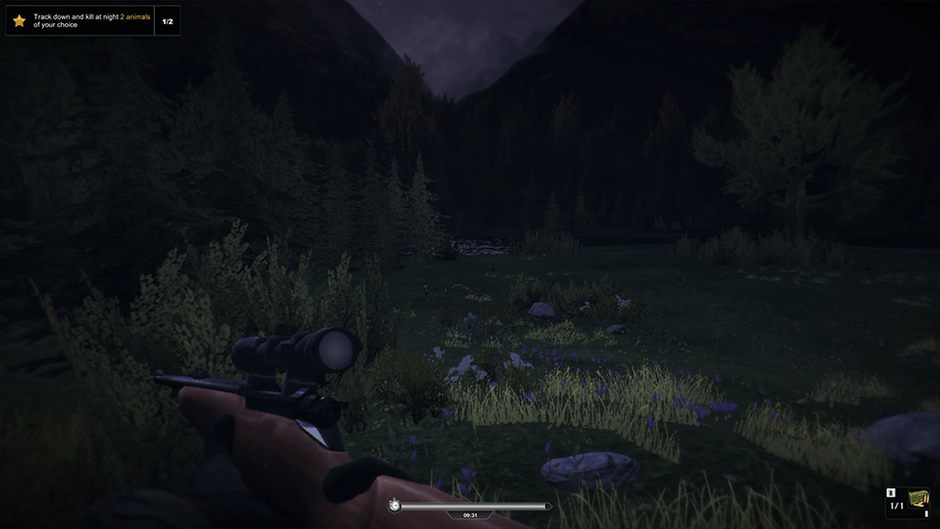 The game itself is, as it was already mentioned, about hunting animals. Some of you who remember an old game called Deer Hunter or The Hunter, a free game released a few years ago, can be disappointed that this game doesn't have any ways of tracking animals and sneaking on them or that it doesn't require players to move quietly so an animal won't get scared. However, this is also a strong point – the game is great for short sessions because we don't have to spend time on tracking a prey that can later escape. 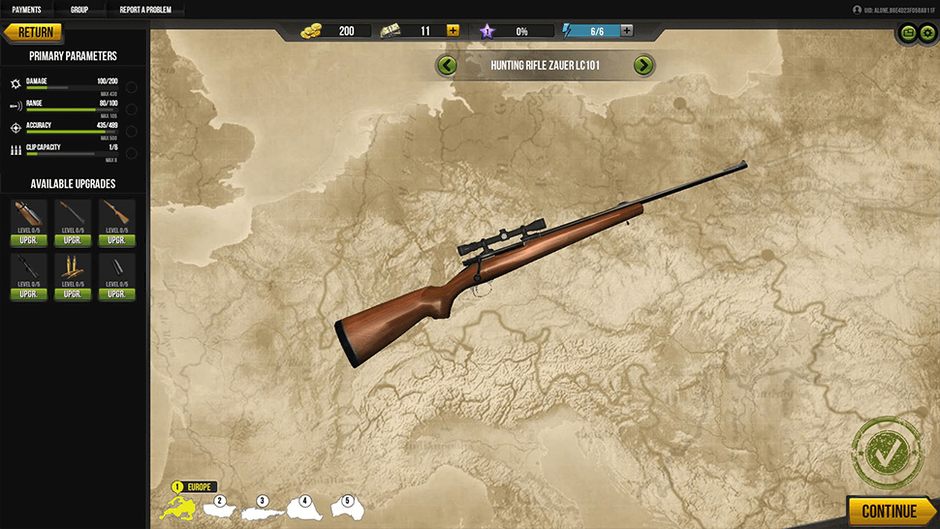 The first thing that you have to do before hunting is to select your weapon. The game offers a few different types (such as shotguns or hunting rifles) and each type has a few models that differ from each other in almost every aspect. Each weapon has numerous stats (such as damage, accuracy, range or magazine capacity) that can also be upgraded. Each of the upgrades has a few levels which means that despite the fact that we can only choose weapons, the game itself offers a lot of options to customize our weaponry. 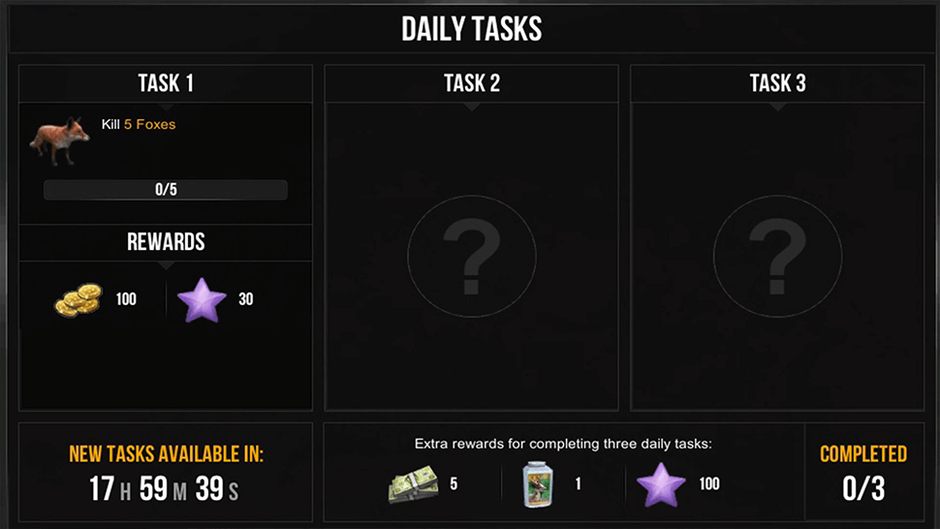 The game is based on missions that have a few different objectives – hunting a specific type of animal or a specified quantity. The world is divided into a few regions with different difficulty levels. Players start in the easiest region and they unlock new ones through hard work. To reach these new areas players need to complete all missions in a given region – even though there is a lot of them, they usually last about several dozens of seconds which means that players can get to new regions after several dozens of minutes. Besides missions, players can also choose Free Hunt Mode – here, you won't find any objectives, your only goal here is to shoot. By completing missions and participating in Free Hunt Mode players are rewarded with coins that are the game's main currency. 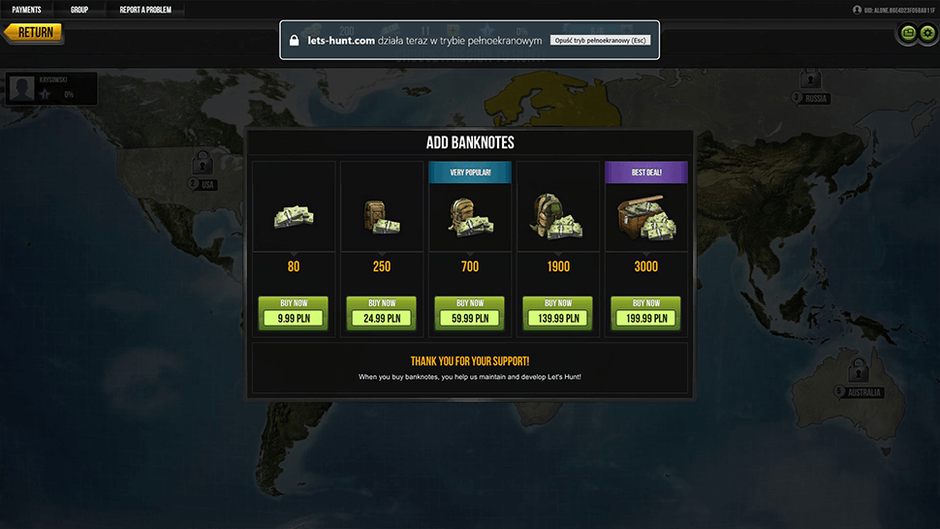 The game uses "energy" system – by starting a mission you lose one energy point from the bar presented in the upper part of the screen. When it depletes completely players have two choices – wait (one point needs 5 minutes to regenerate) or spend the game's premium currency that needs to be bought with real money. However, the time that you have to wait isn't long which means that there is no need to spend the premium currency, especially since you can used it to buy special items – they can be used during the game and offer various effects such as slow motion or highlighting animals' weak points. Sadly, interaction with other players is currently rather limited – you can only see names of other players that are shown on scoreboards with best hunters. 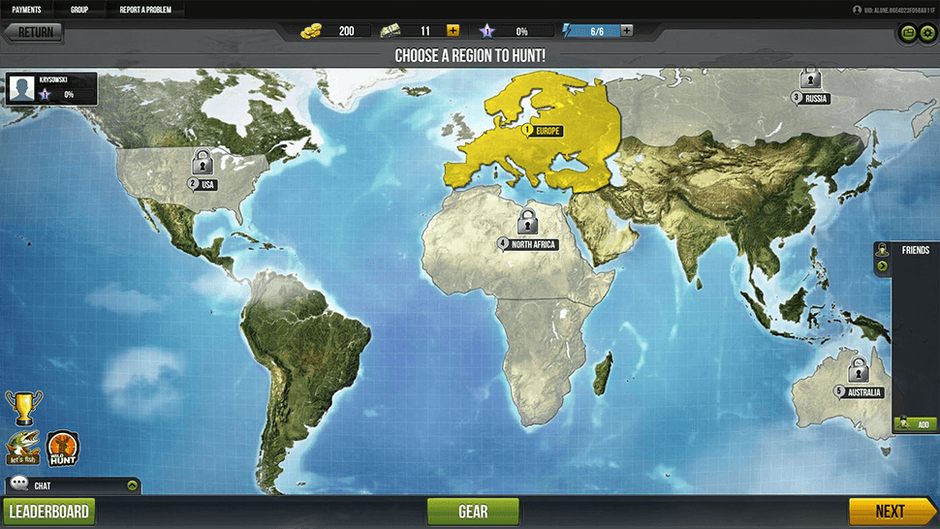 Let's Hunt is a perfect game for short sessions – the missions won't take you a lot of time and the game can be played by those who don't want to spend real money.