League of Angels II is a browser MMORPG that resembles the traditional JRPG games. Players visit a fantasy world infested by evil powers. Their role is to defeat cruel enemies and bring the old order back. Embark on a great adventure, recruit new heroes to their team, participate in various challenges, develop their heroes and get new powers. 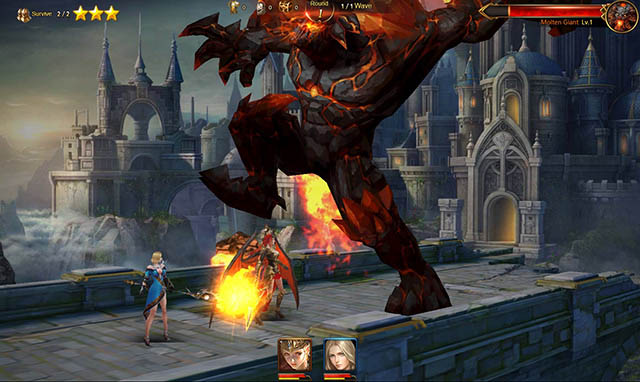 Just like almost all other video games, League of Angles II also requires players to learn the basic rules of its virtual world. The developers prepared a tutorial that lasts several dozen minutes where they explain the combat system, how to manage your party and collect heroes. The developers also explain the available game modes and a few other aspects of this title. The gameplay is divided into two parts – management and combat. In the first part you have to get new heroes, use gathered experience to strengthen them, equip with various items that increase their stats, create a formation, collect rewards and much more. All of this is done in transparent menus that you can access by clicking on the icons located on the right and on the bottom of the screen. 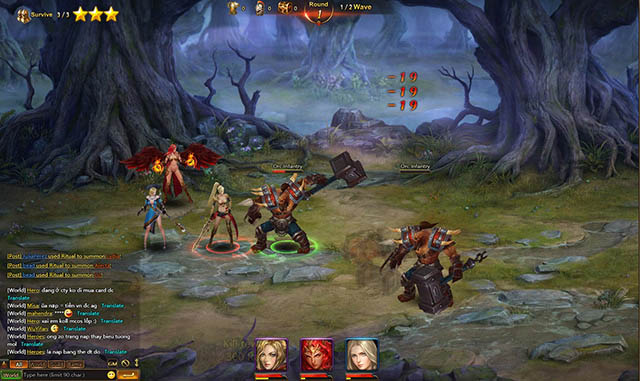 Buying heroes is an important aspect of the game. Some of them can be acquired for free while in order to get others you may have to either work hard or use microtransactions. Also, you can make rituals to get even more powerful heroes. Your party can consist of two or more characters who fight on a battlefield in a specified formation. This is very important because a mage, who isn't really resistant, can die very quickly if you order this character to fight in a frontline. Because of that you have to pay attention to stats and roles of a given hero. Tanks, powerful and resistant characters, should be placed in the front while other, more fragile characters who use range attacks should stay in the back. 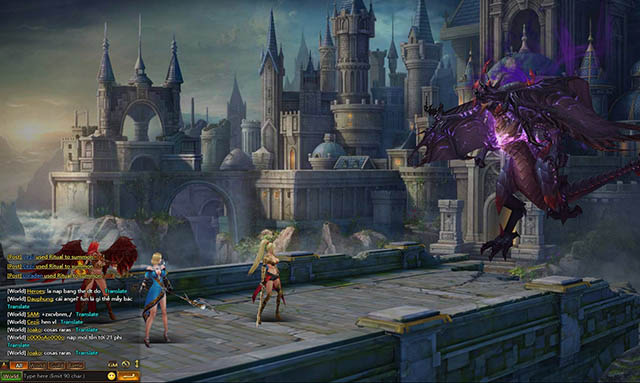 Character progression plays a big role in League of Angels II. Each victory gives you experience and various rewards. Items can be equipped in the menu. XP is for increasing their levels. All of this has impact on regular and special attacks, defense etc. Don't forget about this aspect because it can quickly turn out that enemies will become more powerful than you. However, the game often reminds you to make upgrades so you shouldn't have problems with that. Also, you can't forget about upgrading your equipment. You can spend gold on, e.g. upgrading a sword that will grant your hero even more power. 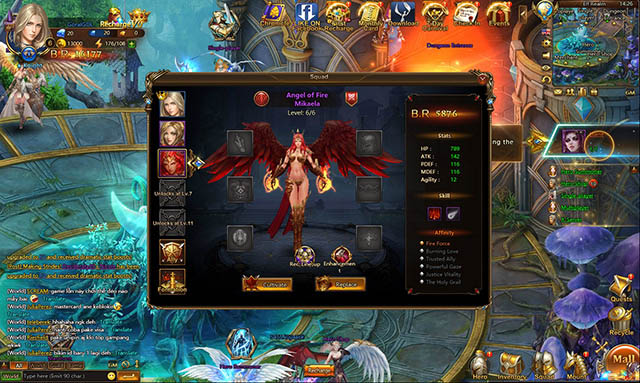 League of Angels II is an MMO game but this doesn't mean that lone players have nothing to do here – the first few hours are played alone. You have to reach a certain point in the game to be able to fight against friends, participate in adventures with other members of your guild etc. The developers prepared a few game modes, e.g. arena where players can face enemies and get points that can be exchanged for items. Also, the later battles reward you with diamonds, the game's main currency. After reaching higher levels you can unlock additional modes such as Hero Trial, The Abyss or Domination. 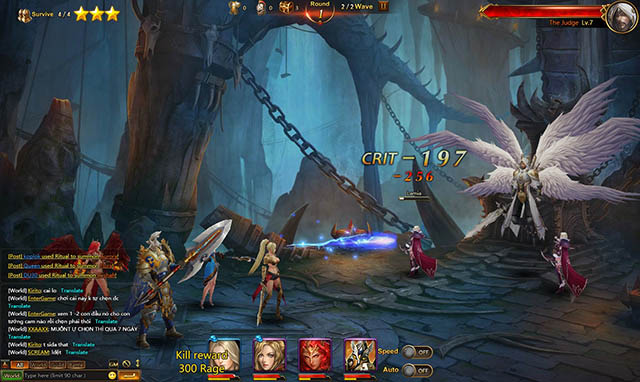 The game also offers various challenges. Complete them and, e.g. recharge your energy, get items that can change your characters' stats etc. These mini-missions are divided into a few categories, e.g. you have to stay logged in for two days, have 35 friends or get a certain number of points on the arena. 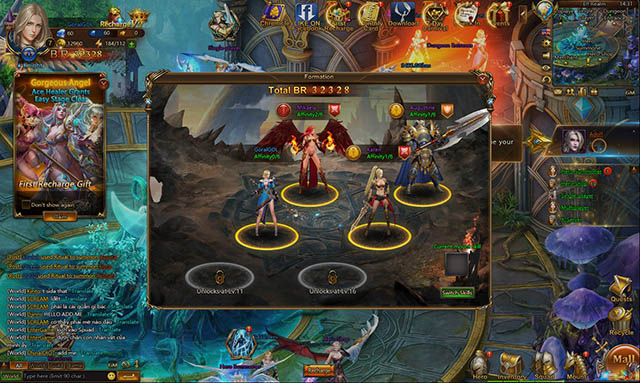 Combat in League of Angels II isn't complicated and is done automatically – heroes perform attacks by themselves and a battle's outcome is decided by stats, equipment etc. However, players can use special attacks – your characters charge them by dealing damage. There is an option to let the AI use them but this isn't a good idea. 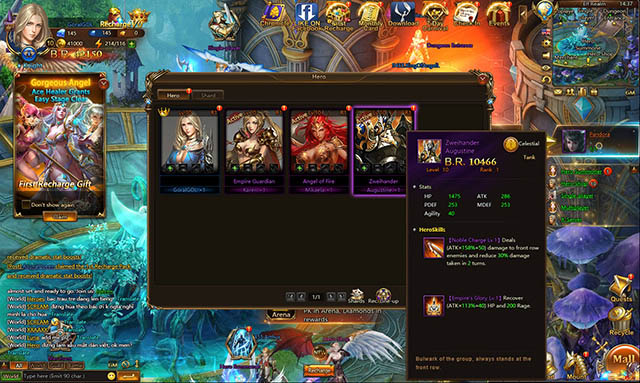 The combat is turn-based but fights are very fluent and they don't have any longer pauses. Also, they usually have multiple phases. Of course, there are battles where you can face only one group of enemies but there are also longer fights divided into waves at the end of which you must face a powerful boss. 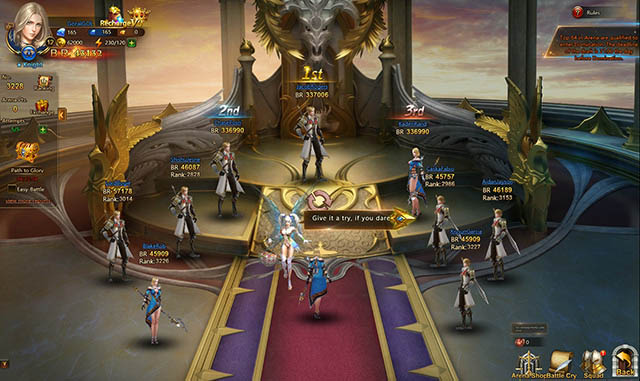 After each fight you can receive up to three stars. Their number depends on how many heroes survived a fight. This is important because stars are for opening chests with rare items such as a lot of experience points. 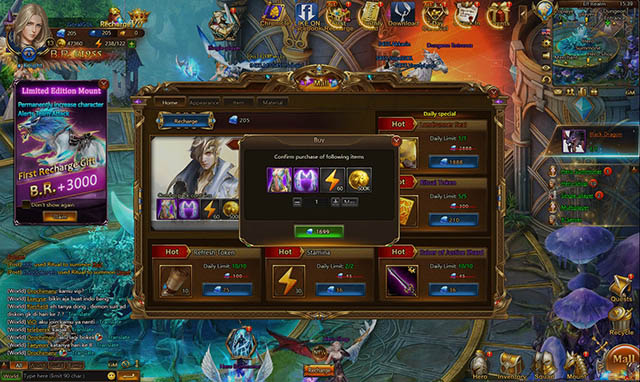 League of Legends II is a free-to-play game which means that the developers earn money from microtransactions. The game uses a few systems. Energy system is the most basic one. Challenges that take place in normal and elite dungeons consume a certain number of "lightning bolts". They recharge automatically but you can also speed up this process – you can use diamonds to buy energy. Diamonds are acquired during the game but its quantities aren't that high which means that players who don't have enough patience can buy them in the shop. Diamonds can also be spent on various items and packs that contain, e.g. equipment that boosts your heroes' stats.

• Don't forget about rewards that you get after completing a level for the first time. These chests appear on the map so collect them right after a fight,
• Try to keep your heroes alive because they can give you stars that you can use to open chests with rare and valuable items,
• Remember to check your characters' menu frequently and upgrade them by using experience points and items,
• Complete additional challenges – usually, they aren't really difficult (they often complete on their own) and they can give you good rewards.