Join AFK Arena and enter a world full of epic battles and stories! Will you be able to protect Esperia from the dark forces?

AFK Arena is a battle game with RPG elements developed by Lilith Games (creators of such hits as Soul Hunters or Art of Conquest). Our main goal is to collect, develop and lead various heroes in many battles, both PVE and PVP. As with other IGG games, this title is also based on the free-to-play model meaning that everyone can play it.

The title by Lilith Games is an idle RPG. Many f2p games have a problem with grinding – without it, you won't be able to make progress in the plot. Idle RPG abandons this gameplay model – grind happens automatically, in the background – just wait a while to get the resources you need! Thanks to that, we can focus on more interesting activities, such as team management, recruitment of new heroes and their development, as well as participation in battles, searching for dungeons and completing all sorts of quests. One can immediately see the most distinctive element of the game – unlike many similar titles, AFK Arena offers really good 2D graphics, as well as interesting art style and excellent character animation. The unique graphic style is inspired by the Celtic mythology. 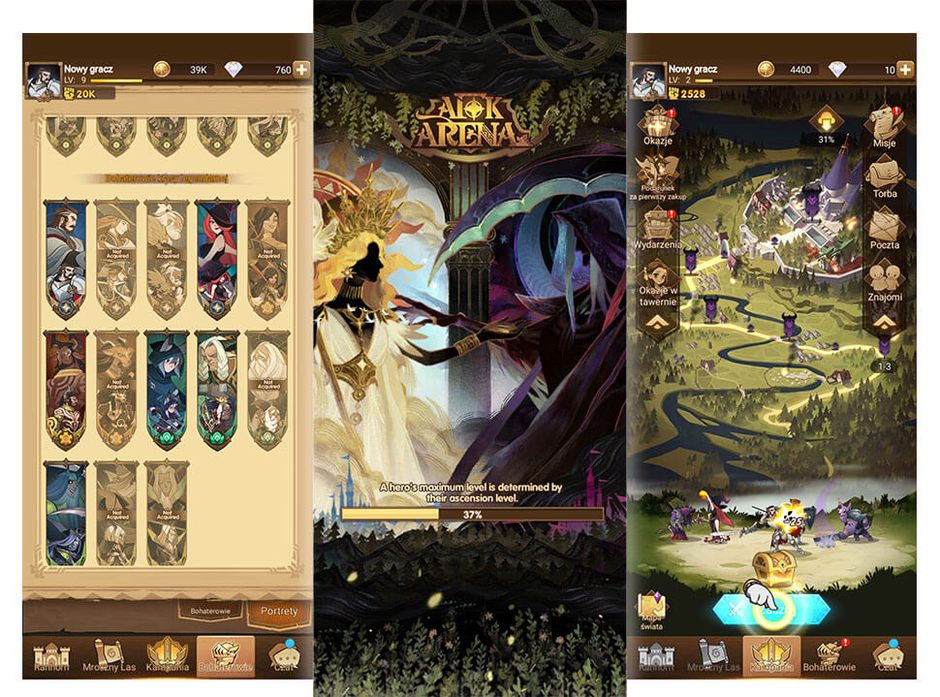 The story is quite simple, based on the conflict between the two deities – Dura, the goddess of light, and Annih, a god of darkness. After creating the living beings by the goddess, her brother became jealous – he created dark entities that attacked Esperia. Our heroes (and there are more than 60) belong to six different factions. They are:

Lightbearers – people and their allies, followers of goddess Dura,

Maulers – aggressive warriors from the wild steppes who value strength above all else,

Wilders – guardians of nature and Yddgrasil, the world's tree,

Graveborns – adepts of the necromancy who are seeking immortality,

Celestials – children of the goddess Dura, the equivalent of angels

Hypogeans – the main antagonists, the dark opposite of Celestials, and children of God Annih. This faction also consists of creatures who are dissatisfied with the current state of affairs and are ready to fight against their own kind.

The game encourages us to experiment with the choice of heroes (our team can consist of a maximum of 5 characters) because each faction has its strengths and weaknesses. In addition, the more heroes from the same faction you have in your team, the stronger they become. The dependencies between them are as follows:

Celestials and Hypogeans are the exceptions – they are strong against each other. In addition, Celestials are counted as members of the largest faction in the team, while Hypogeans add unique bonuses to all units if there are more of them. 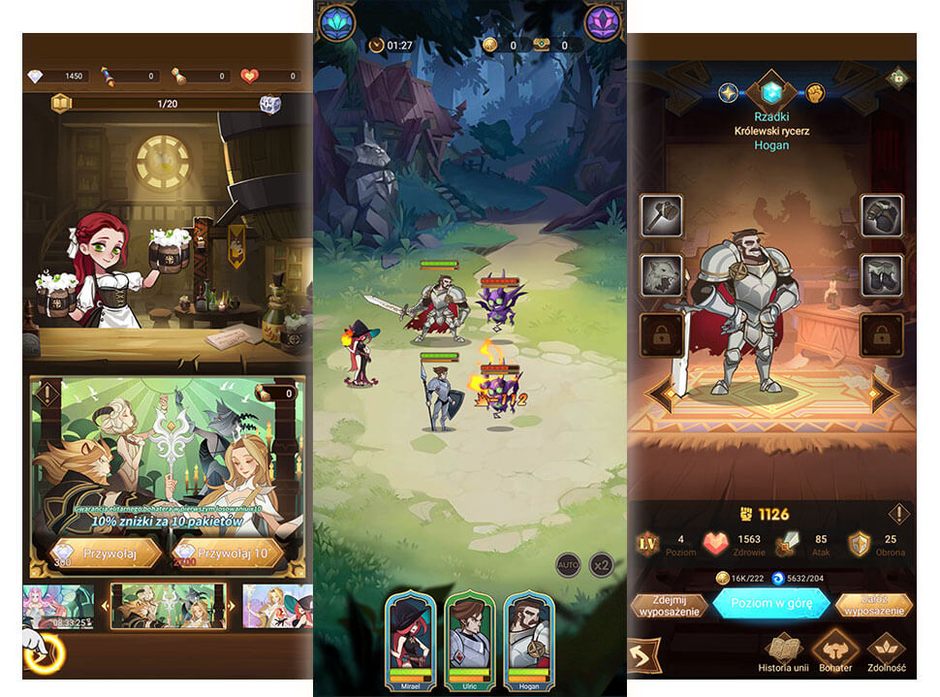 Our main task in the game is to participate in arena fights with all sorts of opponents – from the usual battles with enemy soldiers to epic boss battles and even more demanding challenges in the side quests. Since AFK Arena is an idle game, our team attacks automatically – this depends on our formation and enemy type. Proper team strategy and deployment are often the key to winning a battle! In addition, each of the heroes has an energy level that charges by dealing and receiving damage – when the bar is full, our hero will use their special ability. Try to use them at the right moment, because they are able to radically change the situation on the battlefield. The game has an option to use the skills automatically, but the results are often worse than when you are using them manually. 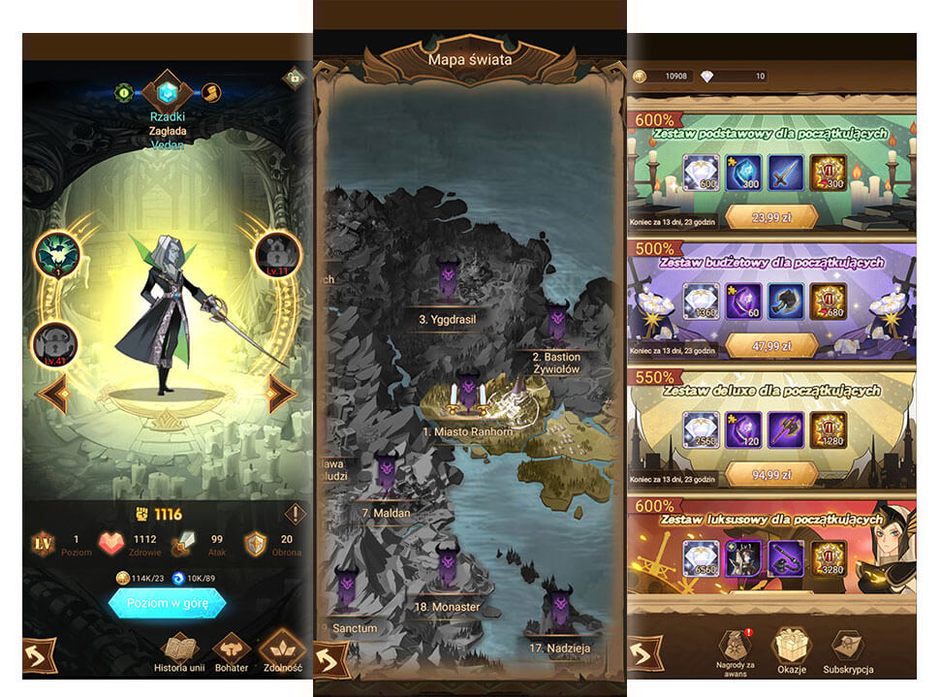 AFK Arena offers an extensive story campaign in which we recapture parts of Esperia captured by demons. We can also complete multiple side quests – they are a great source of magic items for our heroes and various resources. The most important side activity is to explore the labyrinth – completing it (which requires the player to go through 3 levels and defeat 3 bosses) will give us a lot of resources! In addition, we have arena battles where we can face teams belonging to other players and increase our ranking on the server (this rewards us with valuable items and the premium currency). There are also story quests – unlocked after making enough progress in the main campaign. These quests not only test your strategy but also cunning. Other activities include guild quests and raids. 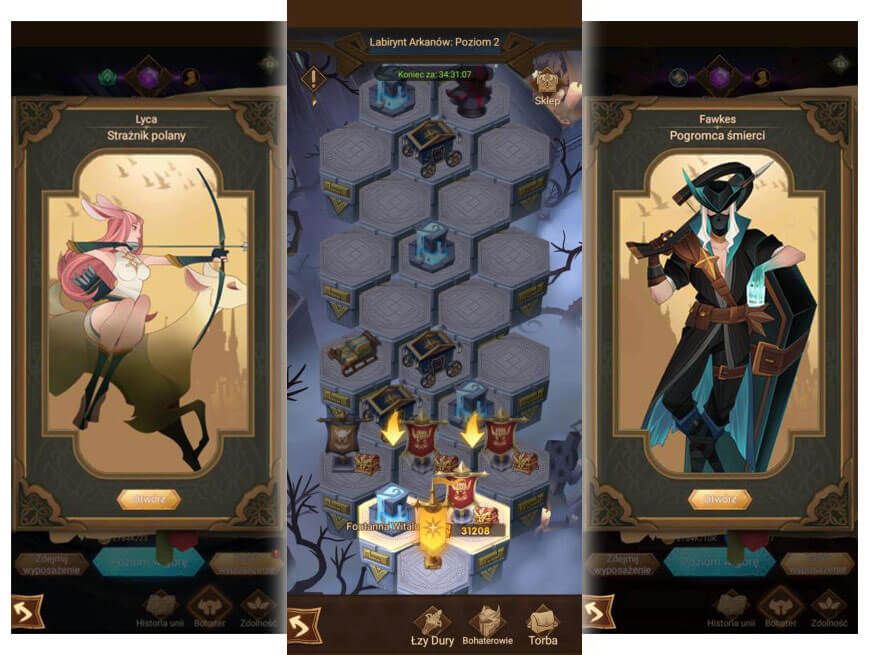 AFK Arena is a free-to-play game meaning that it has its premium currency, diamonds – we can spend them on additional resources or hire heroes. The game provides a constant influx of them – we can get diamonds by completing quests, daily tasks, or making progress in the story. This means that you really don't need to spend real money on them – everything can be achieved with clever tactics and dedication.

AFK Arena is one of the most popular idle RPG games in the world – it is distinguished by excellent quality (including beautiful graphics). Millions of fans every day are trying to defeat the Hypogeans and rescue Esperia! Will you join them?

A few tips for a good start: