Change the fate of the world in a complex MMORPG!

ArcheAge is one of the most interesting sandbox MMORPGs, which gives players unmatched freedom in shaping the game world. Choose yourself whether you want to become a builder, participate in wars, set off on exploratory sea expeditions or even set up your own country!

ArcheAge is a production of XLGames studio, published by the well known company on Polish market, Gamigo AG. The game is set in quasi-medieval fantasy realities (which also have steampunk elements). The game's graphics are realistic, based on the CryEngine engine, so the visual experience is very good. To play it, you just need to download it. 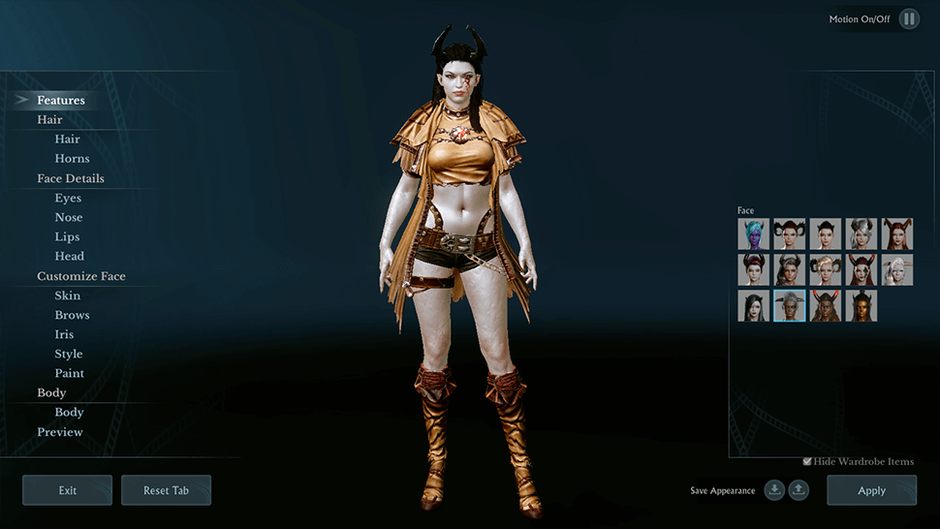 We start our adventure with a very extensive character creator. There are 6 races to choose from, which immediately determine which of the two starting factions you belong to. The first of them is the western continent of Nuia: The Nuians – people with a culture of medieval Europeans, Elves – masters of fast movement, whether swimming or on mounts, and Dwarves – builders of sophisticated machinery. The second one is the eastern continent of Haranya, which is inhabited by Haranis - people being a peculiar cluster of cultures middle and far-east, with advanced technology (gunpowder, steampunk robots); Firran - skillful and agile cat-people, and Warborn - demonic beasts created from enslaved human souls. Each race has 2 basic skills. In addition, at the start we choose the first set of skills - unlike most MMORPGs, classes are based on available skillsets, and not the other way round. All skillsets are 11, of which we have 5 for the start. After reaching levels 7 and 15 we have the option to choose the next ones. This results in over 120 (!) combinations of character classes available in the game! In each skillset, there are 18 active and passive skills to unlock. As befits a representative of Asian MMORPGs in ArcheAge there is a huge number of customization of the appearance of the hero - much more complex than those available for example in Dragon Age or Mass Effect. 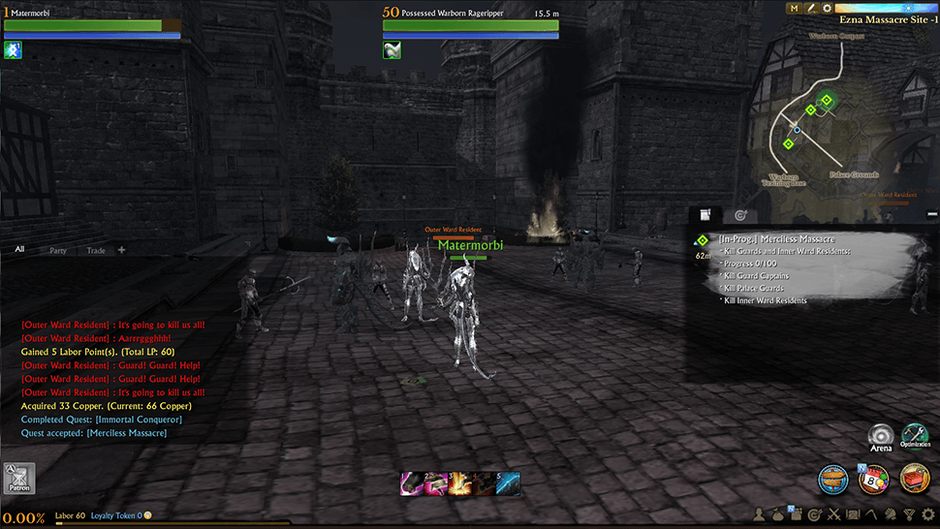 After creating your character we start the game in a prelude, unique for each race, which serves as a part of the tutorial. There, we learn about the basic motivations of each of them and how they perceive the world and their role in it. The Warforged race is a good example - once combat beasts of the queen of demons, now tormented by remorse, the unfortunate creatures are at the very bottom of the social ladder of Haranya, almost as unimportant as slaves. 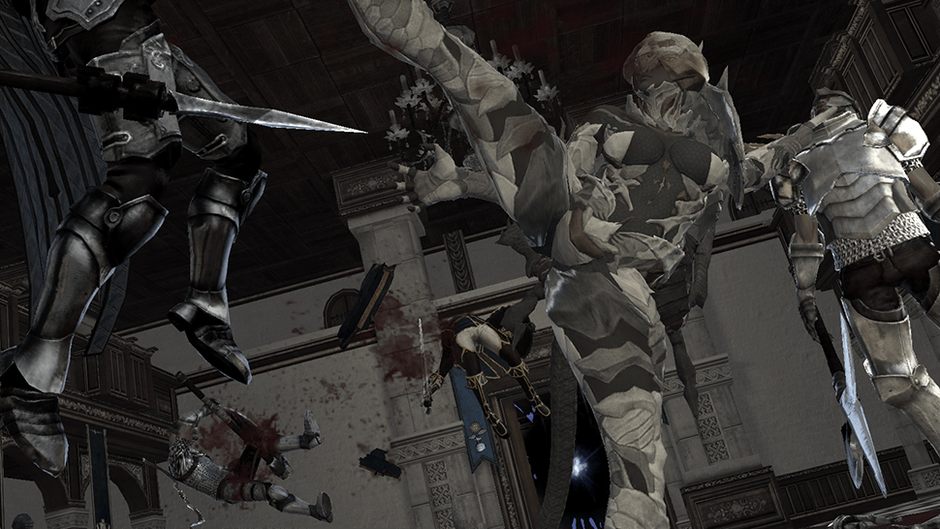 After completing the prelude we will find ourselves in the initial area for a given faction, where for the first minutes we will learn the basics of the second, after the fight, the most important element of the game - crafting. There are many ways of building, breeding, and growing plants in the game - a good chance to earn a fortune is to become a craftsman. In addition, it is the community that decides about the economy of the game, and it is quite extensive. Some races have crafting skills assigned to them - Native Americans build different constructions faster, Harans collect resources faster and Warforged deny penalties for movement of goods during transportation. 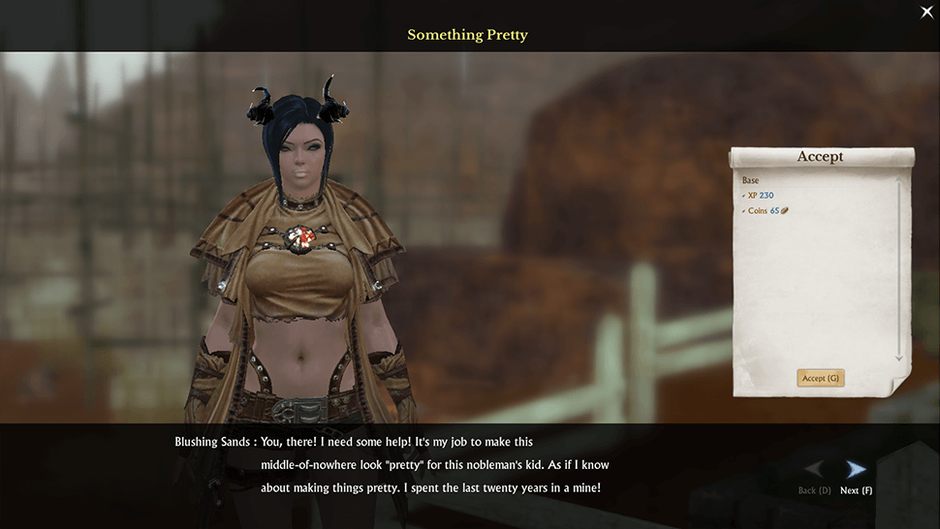 From the very beginning, we can, feel how huge and detailed the game world is. If it wasn't for the presence of a great automatic route mapping tool and a handy minimap, it would be easy to get lost even in the smallest cities, villages and the wilderness. The game world is so complex that we often find ourselves in a multi-level area with different paths leading to our goal. 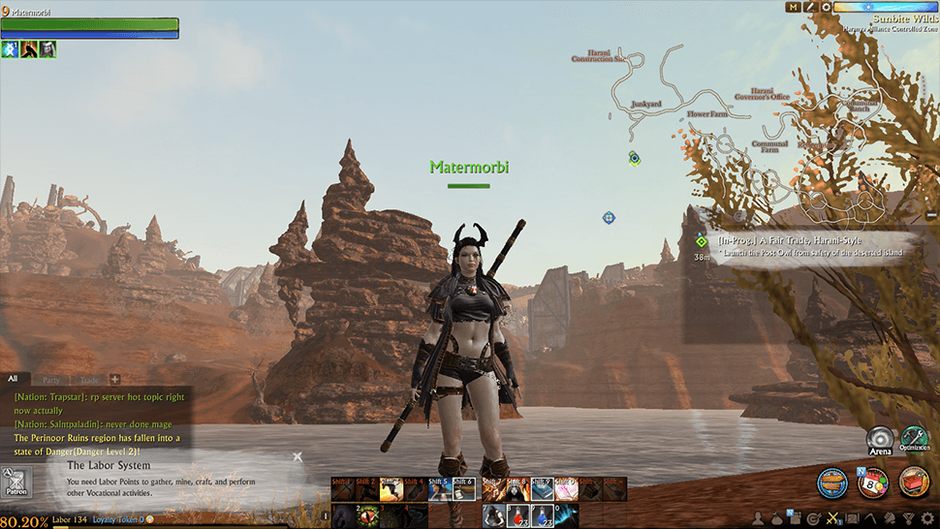 We can move around the world in several ways. In addition to walking and the fast-travel system, in which we move between pre-determined markers, the ability to set up a teleport (first the destination point and then moving to it from any place), we can also use mounts and various types of ships (from a small boat to a big ship), which will speed up our movement around the game world.

Like any other MMORPG, ArcheAge will present us with a series of tasks that will lead us from one city to another, from one zone to another, allowing us to collect gold, equipment and, of course, experience points. These tasks are very diverse; they are not only about defeating monsters or collecting objects, but there are also goals such as taming a wild animal, breeding one's own mount or resolving a dispute between traders. Performing tasks allows you to gain unique equipment, resources and experience points. Getting to higher levels is quick and easy, and exploring the world is really exciting - however, it doesn't yield as many XP, which can drastically lengthen the process of developing the character. 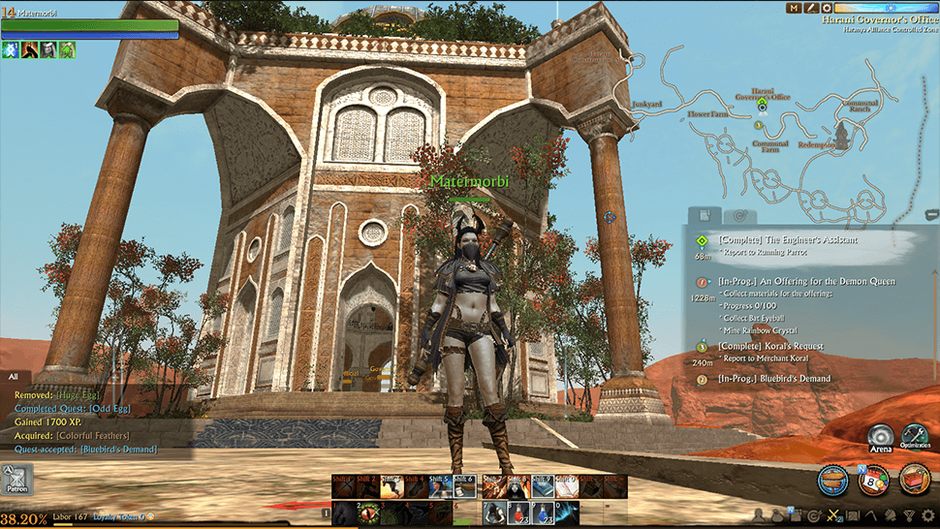 Quests are divided into main and side quests - the main storyline is different for each race, so if you want to get to know them all - you will spend a huge amount of time in the game! Side tasks not only allow us to strengthen our character faster but also show the diversity of the game world and the people (NPCs) inhabiting it in an interesting way. The main emphasis of the game, however, is located elsewhere - ArcheAge is primarily a huge sandbox, focused on interactions between players. 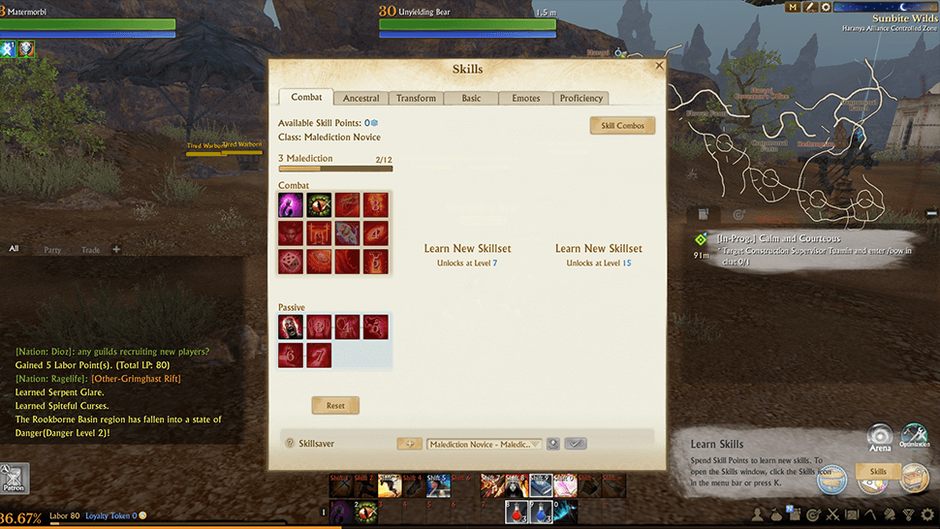 The combat system in the game is a classic example of a MMORPG mechanics. However, we have the ability to switch between control modes - from classic to more action-oriented style. In this way we will be able to fully and skillfully control our character on the battlefield, performing appropriate attacks, and using skills and items, which is especially important in duels against other players. The main aspect of the fight, however, is the thoughtful and quick use of active abilities... 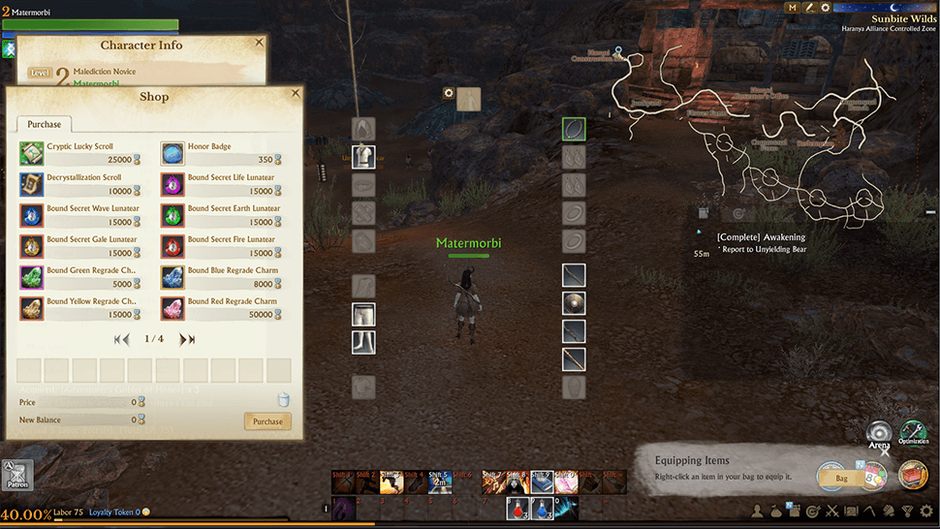 … and there's a lot of them! Unlike most MMORPGs of this type, we are not limited to the use of one class of skills (after the 7th and 15th level of characters we choose their subsequent sets). In some cases, it is more profitable to create combos - both 'passive', i.e. in which after using one skillet the opponent becomes more susceptible to the effects of another, and 'active', in which two complementary skills are used at once. Each skill tree also has so-called ancestral skills - advanced skills for which additional resources are needed. Some of the races also have the shapeshifting ability - in a new form, they have a separate set of skills, which replaces the previous ones. If we are not satisfied with the choice of our skills - we can easily reset them by performing a special, short quest. 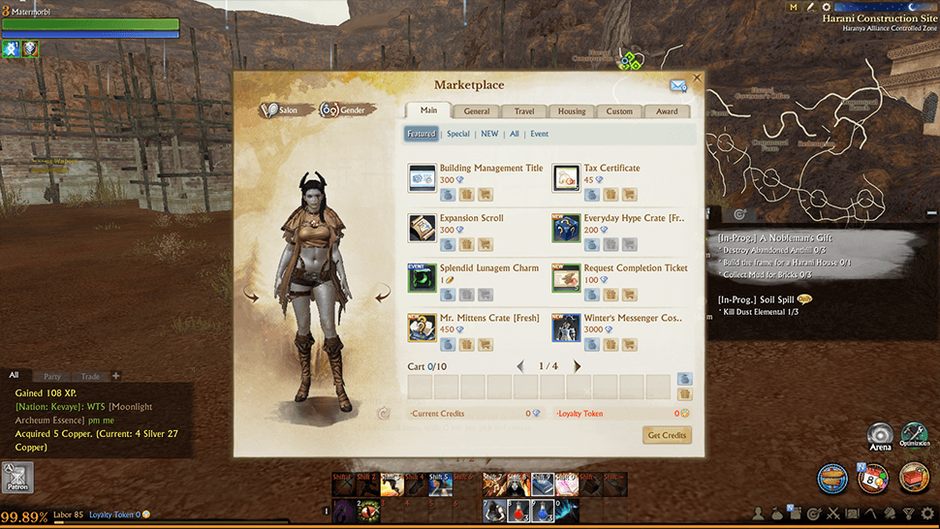 One of the distinguishing features of ArcheAge is the extensive social aspect of the game. The game presents us with a very extensive sandbox, in which the players decide on most of the events taking place in it - from simple things like setting up a guild, through setting up the world economy, to setting up their own countries! There is a great deal of freedom in the way you approach the game - some join craft guilds, others join armies - both available in predefined nations and those founded by players, some even become pirates. You can say that ArcheAge is on the right path to becoming a "fantasy Eve Online." Another aspect of the game is crafting - it is so extensive that thanks to it you can easily earn for most of the high-level equipment. We have many available methods of construction, breeding, and craftsmanship - but all of them need time and commitment. Since the economy of the game is driven by the actions of players, it is worth taking a closer look at it. 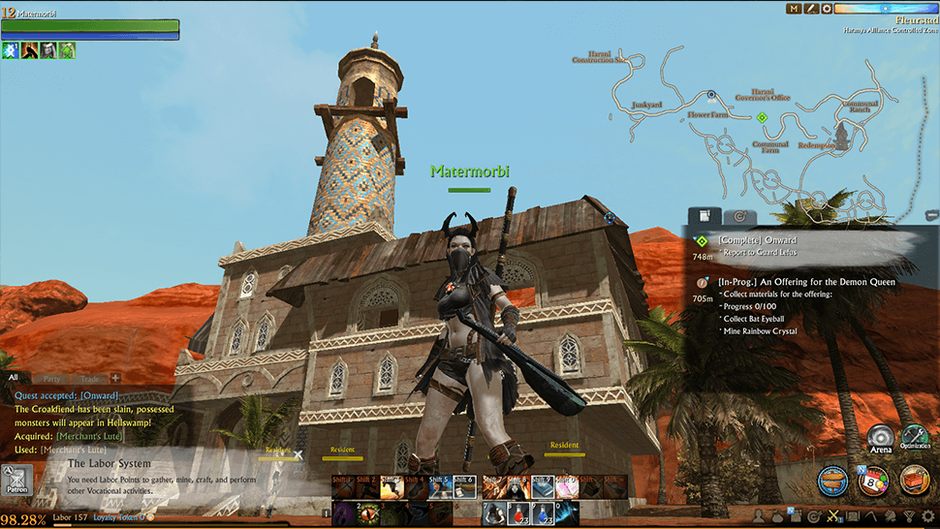 Finally, it is worth paying attention to the premium currency. In ArcheAge we will use these points, among other things, to buy various costumes, bonuses, and seasonal accessories. Currency is not the cheapest, and many of the available items can be very useful or attractive. Interestingly, we can replace this currency with loyalty points, which we receive for daily logging in and doing special tasks. Thanks to that we will surely be able to get at least some of the desired items with ease.

ArcheAge is a huge, vibrant with its life, unique MMO RPG sandbox, in which we can spend hundreds of hours. Real influence on the development of the game world, active community, many directions of character development and very good graphics are undoubtedly the advantages of the title!

A few tips to conclude: