Magical farming game in your browser

A magical forest needs your help after the invasion of the evil wizard! Transform into a sorcerer, collect resources, visit friends and build your own farm to restore the former splendor of this extraordinary world. And remember to bring cookies for your brave helpers - furry Shmu.

Charm Farm is a simple economic strategy developed by Nevosoft studio which can be played for free through a web browser. Its action takes place in a magical forest, which was invaded by the forces of the evil wizard Garp, forcing the guardian of this area, the fairy Kaya, to escape. Now she needs the help of other wizards to restore her domain to its former state. The roles of wizards are played by the players. 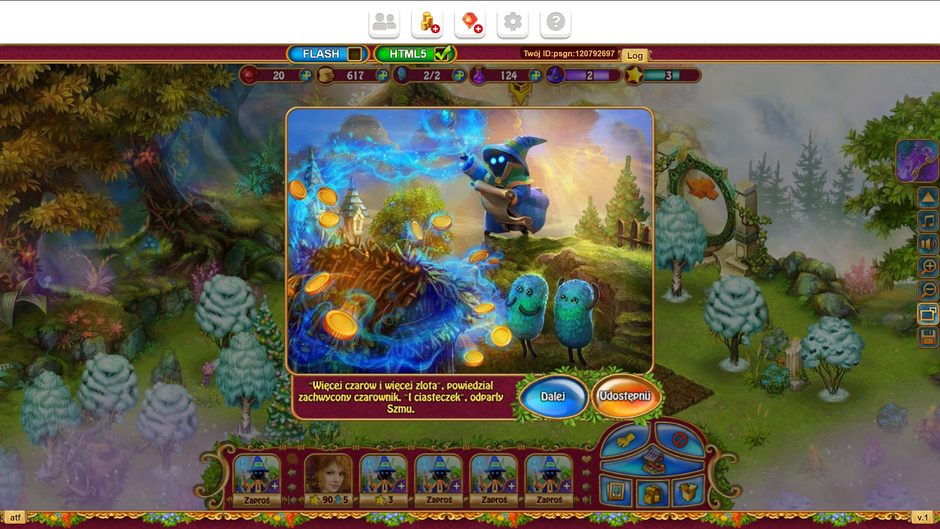 The idea of Charm Farm is quite clear – to build the nicest and most efficiently functioning farm, along the way completing various missions given to us by the game. To do this, we need to gather mana, which is required to perform any actions. The most basic way to get it is to click on the so-called. sources of Mana, which are clusters of purple crystals. They are renewed every five minutes.

Once we have mana, we can begin to clear the area and collect basic resources. We do this simply by clicking on trees, stones or bushes and waiting for the required time. It is worth noting that over time they may appear again on the map, so there is probably no fear that we will suddenly run out of basic materials. 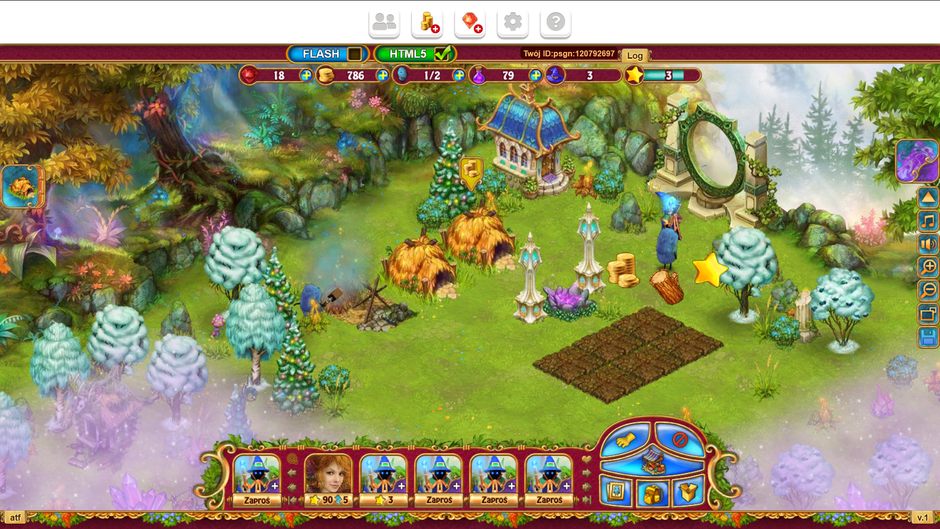 Finally, after collecting the raw materials, we can proceed to building basic constructions. First we need to lay the foundations. This costs gold, which is produced by some of the buildings (either automatically or after exchanging the right amount of Mana). Money can also be obtained by selling various items found on the map. When the foundations are ready, we need to finish our building. To do this, we need to use previously acquired materials such as hammers or magic dust (it is also produced by various buildings). It is worth noting that once built, structures can later be moved, rotated, sold, and even moved to the warehouse to be left for later.

In Charm Farm, we can also breed animals and farm plants. To do the latter, we need to prepare the patches. When these are ready, we must spend a sufficient number of gold coins on the seeds of our chosen type of flora - of course, most of them are not ordinary but magical. Now, we have to wait a while and then we can collect the crop, which offer additional magic points. Harvest have to be made on time, as mature plants wither over time. We can bring them back to life with the help of a magic watering can (which we can get, for example, by collecting special resources). On the other hand, animals are raised in special buildings and created using mana. 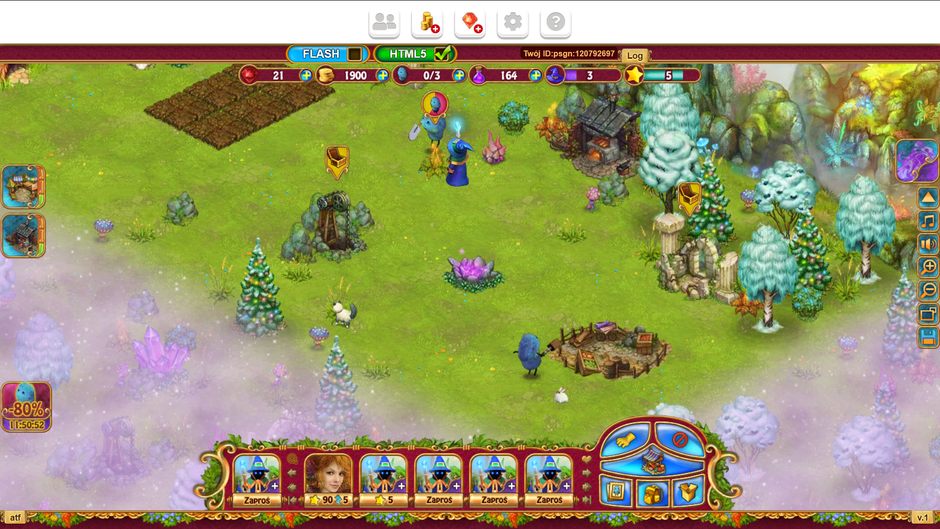 Since our hero is a wizard, we can utilize magic to help with the growth of our household. Spells are developed in the so-called Wizard Tower, costing mana and in the case of higher-level spells, gold. They help us, for example, to renew withered crops or to speed up production in buildings. Access to further spells is gained by amassing enough experience, which is a "by-product" of developing spells.

The profession performed by the character controlled by us involves one more important thing - it is not he who performs all the activities that require physical effort. These tasks are handled by furry, cookie-addicted creatures called Shmu. They live in special houses built by us. In the beginning, we have only two assistants, and only so many actions at once we can perform. Over time, however, we can increase their number by building more houses. 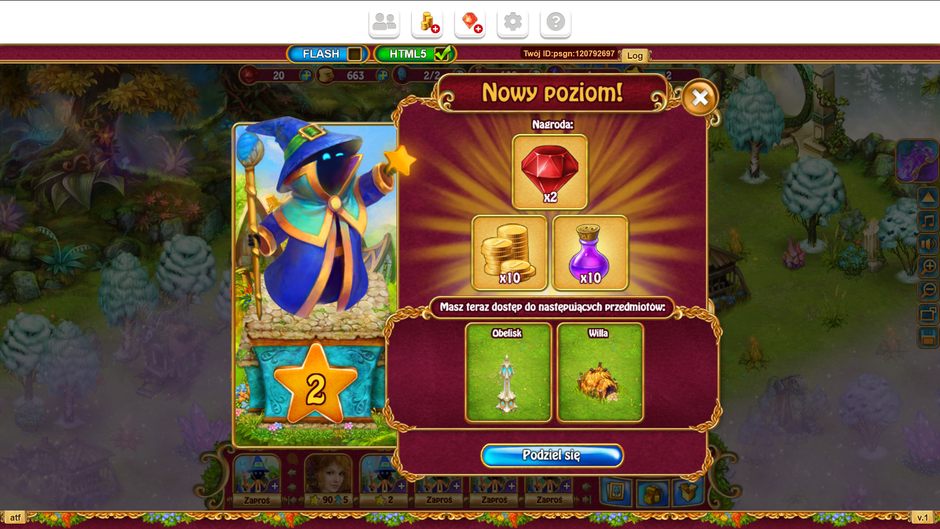 By performing various activities and collecting elements produced by buildings, we also accumulate experience points. After collecting the right number of them, we will advance to the next level. The reward for this is, among other things, additional structures, including cosmetic objects such as obelisks or fences, as well as plants and animals.

Another reward for the increase in experience are small amounts of so-called Rubies. This is a premium currency, which, like gold, is also available for purchase with real money in the game store. We can spend it, for example, to accelerate the speed of building structures or the aquisition of products received from them, instantly unlock various high-rise buildings, additional mana, etc.

We can also receive rubies and gold for daily login. In addition, daily logins are a way of receiving additional resources. 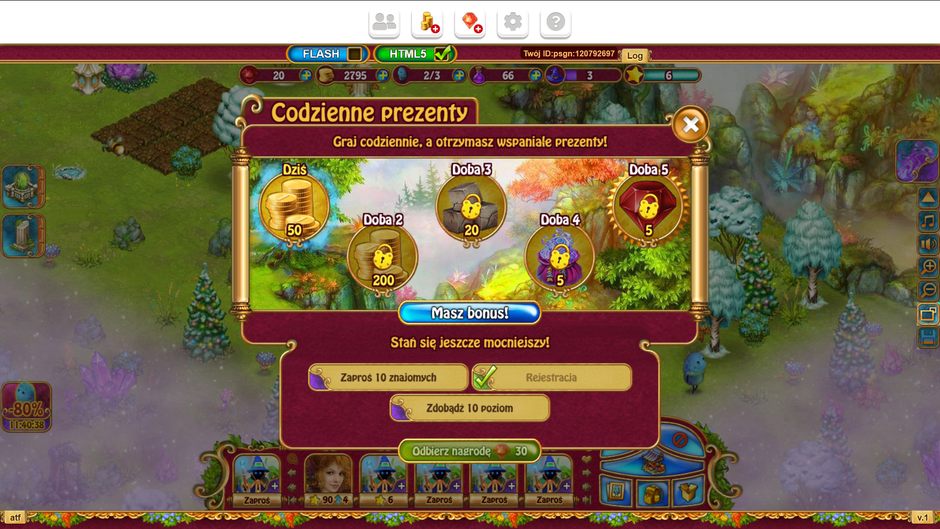 If, despite accumulating supplies, whether by collecting or getting them, we still suffer from a lack of them, then we can always ask our friends for a gift. Moreover, there is an option to visit their farm in person, which involves not only checking how it appears, but also the possibility of taking advantage of its buildings. However, it costs premium energy, which is replenished with the help of rubies.

The Charm Farm visuals are two-dimensional, colourful and stylishly reminiscent of illustrations in fairy-tale books. The fantasy atmosphere is further enhanced by the soundtrack and background sounds. 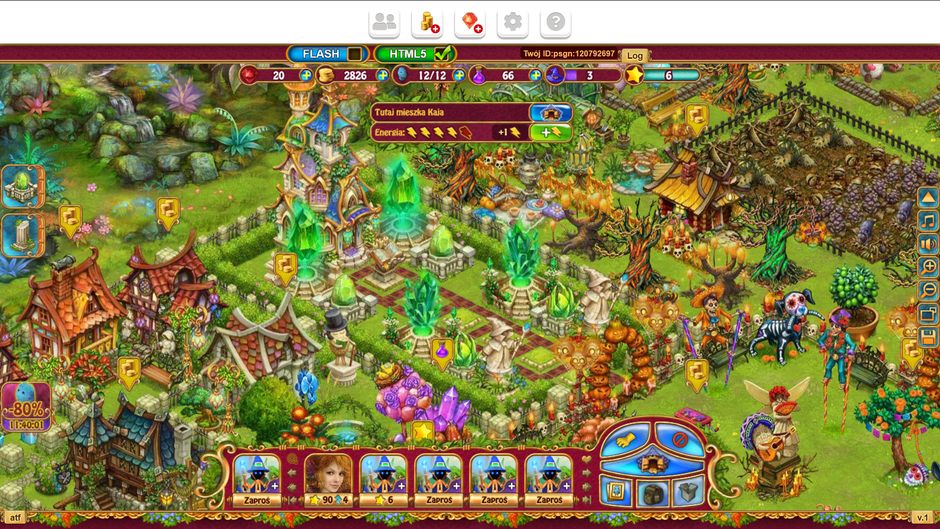 So if you like from time to time to virtually enter a world reminiscent of fairy tales and at the same time prefer calm gameplay involving building your own estate, then the world of Charm Farm should fall to your liking. Adding new elements to your farm, expanding its boundaries and seeing how from a simple settlement it becomes an eye-catching, thriving facility, can provide entertainment for really long hours.