An RPG in the world of One Piece!

Welcome to the world of pirates and hunters from One Piece manga and anime. Fight against opponents and other players, develop your team's abilities and experience amazing adventures. All this in an audiovisual setting referring to the cult work by Eiichiro Oda.

Crazy Pirate is an MMORPG game published by R2Games from China. Its action takes place in the universe known from the anime and manga One Piece by Eiichiro Oda. We come to an extraordinary world full of pirates and their hunters experiencing various adventures on the sea and land. In the original, the main character of the story is Monkey D. Luffy, a young boy commanding his crew, the so-called Straw Hats, which accidentally eats gum-bum fruit and, as a consequence, is able to stretch its limbs. His goal is to get the treasure and the title of the king of pirates. The game itself, however, does not have any specific plot. 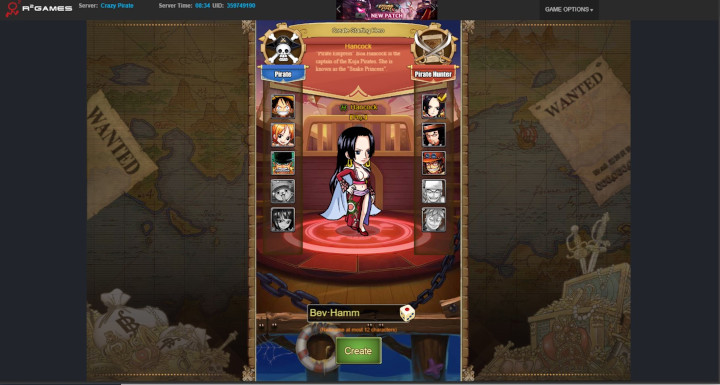 At the beginning of the game in Crazy Pirate, we choose the starting hero (or heroine). He can belong to one of the two factions - Pirates (of which Monkey D. Luffy himself is a part) and Pirate Hunters. Each hero has different traits, skills used in combat, and whether he prefers close or long-range combat. Over time, more slots will be unlocked and we will be able to expand our team with new characters, which will significantly increase its combat potential. Importantly, the heroes for our team are recruited, among others, from those we rejected at the very beginning. Among them, we can find characters known from manga cards or screens.

Then we can jump into the game itself. This one takes place practically without our participation. Our avatars simply break through successive opponents and, if possible, use their special abilities (each has four of them - one passive and four active).

There are several types of matches in Crazy Pirate. The most basic one is defeating waves of enemies. Our avatar team does it ourselves, even if we do completely different things and do not observe the clash directly, or even when we are offline. 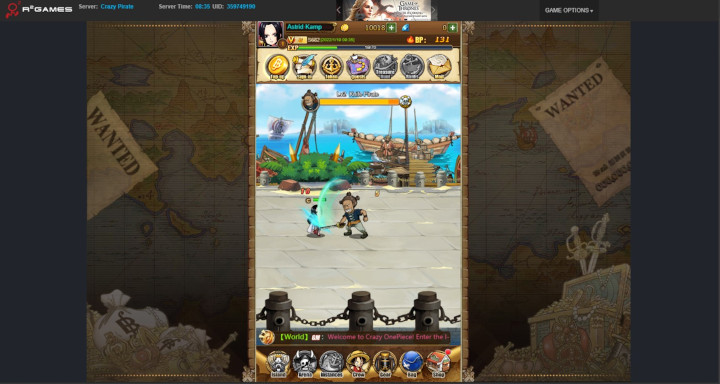 Later we have fights with regular bosses. They are much more powerful than ordinary opponents with which our characters fight in this most basic mode. Therefore, it is better to think carefully about whether to take up the challenge. Defeating story bosses jumps to the next levels, which in turn unlocks some of the game's elements. Chapters are made up of successive levels. There are 160 of them in Crazy Pirate.

Next are the so-called instances. It is a series of clashes with increasingly powerful bosses that have been divided into several thematic segments. Importantly, if we have already managed to get rid of one of them, we get the chance to approach it again and, in order not to waste time, there is an option to end the fight immediately. This can be done twice in a while.

There is another mode that works quite similar to the two above. It is called the Pirate Treasure. However, you have to be careful, because the opponents in it are really powerful.

There is also a mode called Trials in Crazy Pirate. This is a series of challenges that test our characters' abilities. There are five trials in total - Basic, Normal, Advanced, Final, and Endless. Each of them is distinguished by an increased level of difficulty compared to the previous one. 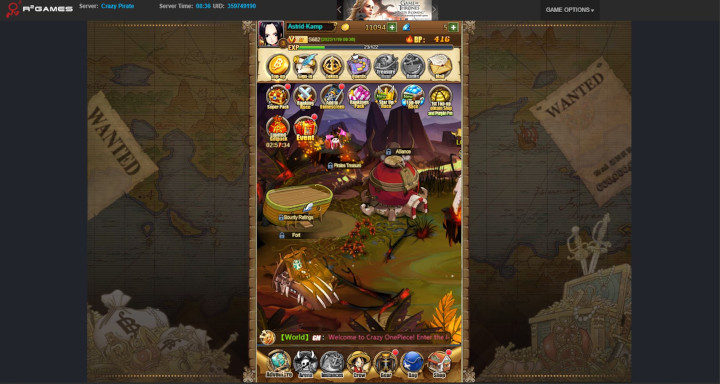 As befits an MMO game, nothing stands in the way of challenging the heroines of other players. This can be done in several ways. First, we have the Arena. After entering it, there is the option of regular clashes with teams created by other people playing Crazy Pirate and thus climbing the rankings to have a chance for fame, glory and fortune. Importantly, other players do not have to participate in these clashes directly. Their heroes defend themselves automatically after the challenge. The same also applies to our heroes.

An interesting variation of the multiplayer competition in Crazy Pirate are the inter-server battles. These are clashes between teams of people from different servers. At the very start of them, we land on a map divided into several locations. We have to take one of them. Then the game selects our opponents. They choose one of the other fields each. When the battle begins, our task is to collect as many points as possible. We get them by fighting both other and monsters. If we are in the lead at the end of the match, we get attractive prizes. 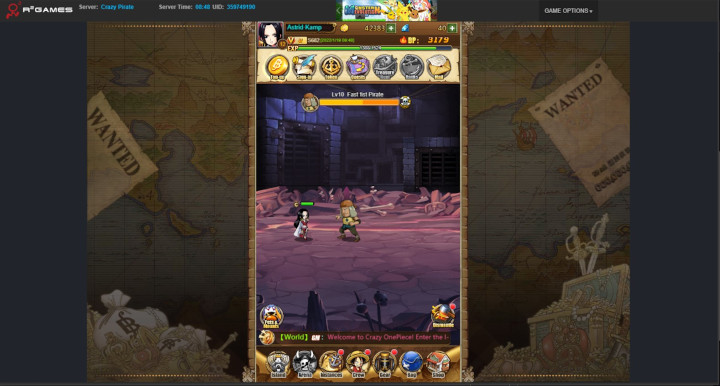 However, if we are interested in more peaceful interaction with other players, we can always decide to establish or join an alliance. This opens the way to a range of attractions, such as new battles or mission types, for which you can earn attractive rewards.

There are several types of gratuities in Crazy Pirate. We get them not only during combat, but also by performing special missions, such as performing a specific activity or defeating certain enemies. The main type of reward is experience. As in every RPG, after collecting the right amount of them, we will advance to the next level. This, in turn, unlocks new features, increases the character's basic stats, and unlocks the ability to develop individual skills.

Strengthening both passive and active abilities of our characters costs gold. This is the base currency of the title. Interestingly, we can also get it in mines. We send miners and slaves to work in them, which we recruit from among other players. Gold also gives us a prayer done every now and then at the Admiral statue on the Island screen. 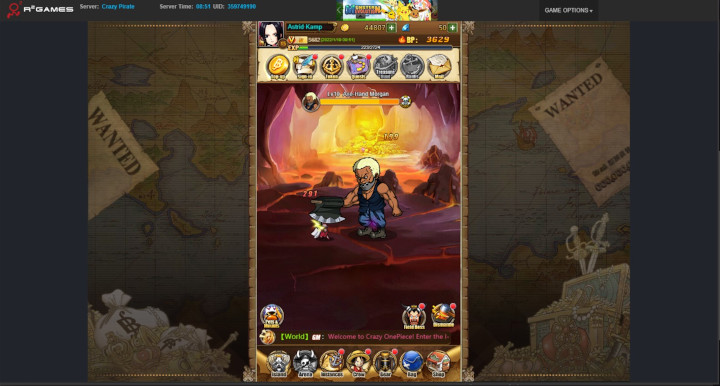 Another type of reward are different types of items. We are talking about weapons, armor and jewelry. They greatly increase your combat skills. In addition, we can also improve them, enchant, increase its prestige, etc., which further increases their combat abilities. We do it with gold and special types of stones obtained during the game.

There are also types of items in the game that can be used, for example, to prepare syntheses (this is how gems are made), to improve the so-called Hooks, etc. By doing this, we increase the combat abilities of our pupils.

In order to increase the statistics of the heroes, we can use the services of various creatures. There are two types of them in Crazy Pirate. The first are Pets, which are just another party member, dealing little damage to enemies. We get them by taking part in various activities. The second is Mounts. They cannot attack in person, but they can passively increase the strength and abilities of warriors and apply debuffing effects to enemies. Access to a given steed is obtained after collecting the appropriate number of elements. The skills of our "pets" can also be improved with the help of special items. 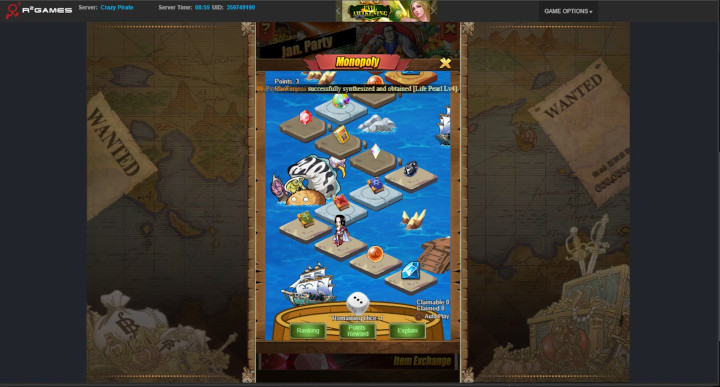 While many things in Crazy Pirate can be obtained through normal play, there is also a premium currency in the title that allows you to speed up certain things, gain the ability to instantly purchase some valuable items, etc. Diamonds are. They drop out during the game, but we get more of them by spending real money on them, either by purchasing a sum of them at once, or by purchasing Passes that guarantee daily deliveries. By using real cash, we also increase our VIP status, unlocking bonuses in the form of, for example, additional chances to automatically defeat the boss in Instances or faster collecting loot in offline mode.

Crazy Pirate can boast a pleasant, two-dimensional graphic design, full of colors and special effects. Fans of anime and One Piece manga should find their way in it without any major problems. The music also maintains a decent level, making the experience of the title more pleasant. 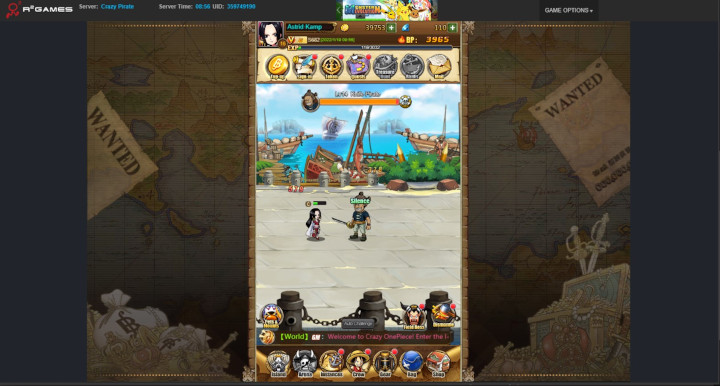 So if you're a One Piece fan, be it manga or anime, you should have fun playing Crazy Pirate. In the title you can find a number of references to these works of pop culture. The gameplay itself can engage for long hours, and due to its design, thanks to which we gain experience even when offline, we can take a longer break from this title and not be afraid that we will be left behind when it comes to the level of the character.