Build a citadel on a floating island, and lead the demigods to victory in this idle RPG!

Corruption is wreaking havoc in the magical land. The deities have lost their former glory, and to make matters worse, a bloody war is fought. Only mighty heroes can restore order. Lead them to battle and save the world from destruction. Dynamic gameplay, colorful graphics and tons of challenges - that's what Dark Genesis has to offer!

Dark Genesis is a dynamic MMORPG developed by Esprit Games studio, in which you can play via a web browser. The action of the title takes place in a magical land, combining elements of various mythologies from various corners of the world. During the game, we have the opportunity to take control of a group of demigods endowed with powerful powers. During their adventure, they will travel through a number of locations in different climates - from deserts and tombs in the style of ancient Egypt, to fortifications resembling the Chinese Great Wall. They will find a lot of valuable treasures, but they will not prove crucial in their journey. The ultimate stake of their mission will be to stop the destruction of the entire land, end the bloody war and restore the former glory to the deities. 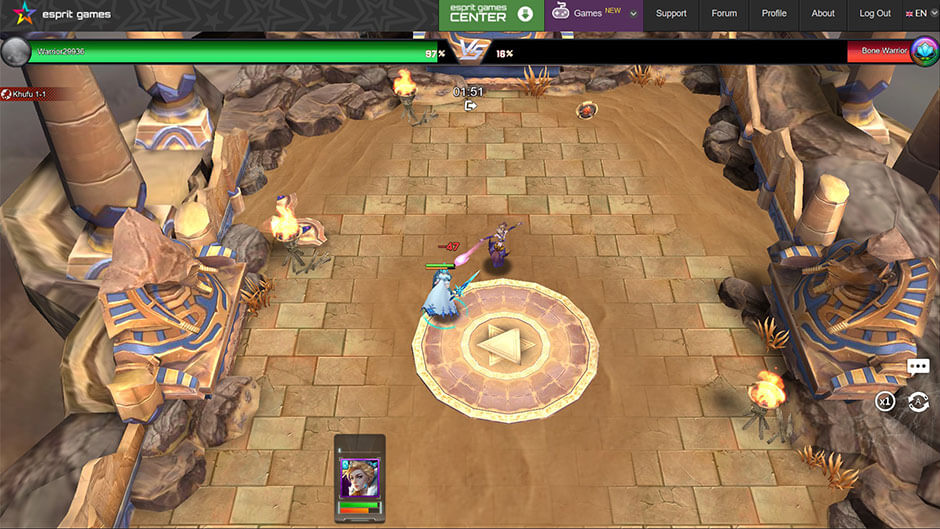 The main gameplay principles in Dark Genesis are not too complicated. At the very beginning of the adventure, we get the first hero. When we press the Play button located in the very center of the bottom of the interface, we will be transferred to the map of the main story. We will be able to see how our ward (and at a later stage a group of wards) fights monsters that drop gold and gems. He cannot die at this stage. It is only a kind of representation of the mechanics of collecting treasures in a chest that can be opened after a few moments (it clogs up to the maximum after twelve hours).

When we are ready, we can click on the Challenge Next Stage button. The list of opponents and the screen for selecting the team you want to send to fight them will appear. This is an important moment of the fight for two reasons. 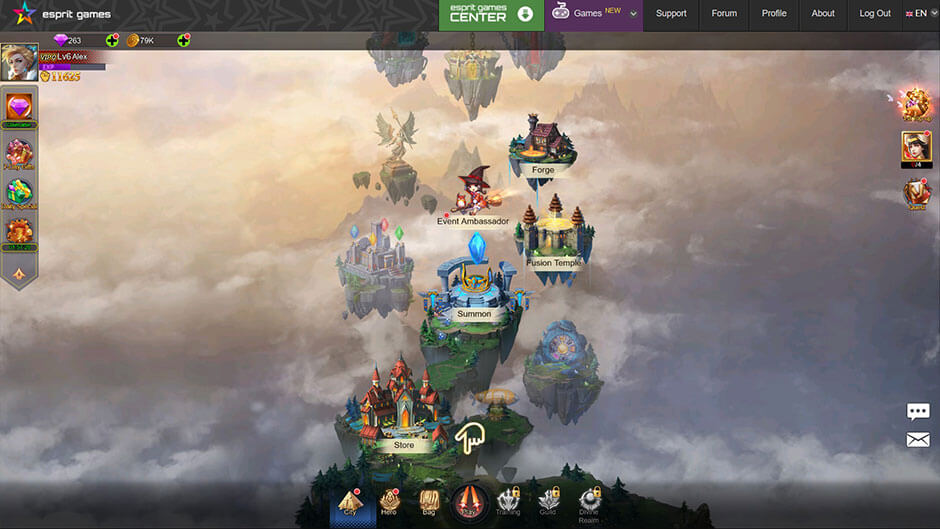 First, we have to properly arrange our demigods. For those who fight in close quarters and have a higher number of health points, it is worth placing them in the front, while those who prefer magic and ranged attacks in the second line.

Secondly, each opponent and hero under our control has an element assigned to it (marked by a card in the upper left part of the portrait). There are five of them in the title - Water, Nature, Fire, Light and Darkness. They interact as follows..

If a hero or creature attacks an enemy with an element that is being fought by the one they represent, they receive a 20% damage bonus. 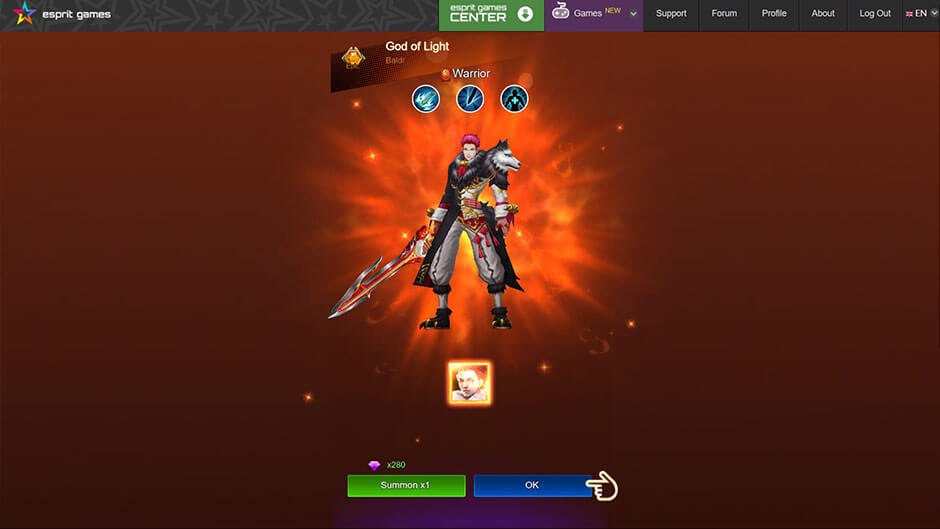 It is a bit different in the case of Light and Darkness. Both of these elements fight each other. By exposing heroes representing one of them, we can count on various bonuses for all other characters.

Elemental selection of warriors is important for another reason. If we deploy two or more heroes representing the same element, then they all receive buffs, incl. to health or attack power.

Once we have chosen the team, we will finally be able to move on to the clash. It takes place automatically - the heroes attack individual enemies on their own and when they reduce their health to zero, they move on to the next ones. We can, however, have some slight influence in the fights. Well, during them, our characters are charged with an orange bar. When it is completely filled, then we can use their individual special skills. Some of them deal enormous damage, others heal allies and guarantee various buffs. However, if we do not want to use them ourselves and we prefer to limit ourselves to watching the action, nothing prevents us from turning on the fully automatic mode. There is also nothing to prevent you from skipping the entire battle and going straight to its results. We can do it four times a day for free. 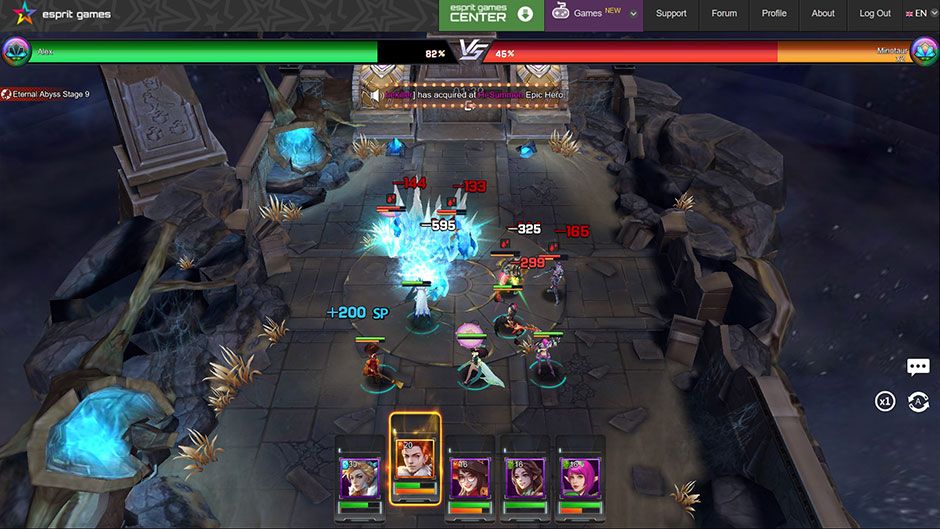 The fight ends when all our characters die or defeat their opponents. In the first case, of course, we fail and we can make another attempt. In the latter, we win and receive a number of prizes. We can also receive fountains for completing missions, logging in every day, etc..

The main type of gratification is experience for our account. As we advance to the next levels, we unlock new functionalities in the game.

Equally important types of rewards are gold and crystals. Both of these elements are necessary to develop our heroes - increase their statistics and teach them new skills (each character has a total of three - one active and two passive).

Next we have a variety of items. There are five types of them in Dark Genesis - weapons, armor, amulets, boots and coats of arms. Each of them, of course, guarantees bonuses to statistics - the greater, the better the equipment. Importantly, we are not doomed to acquire high-level equipment only by fighting or completing missions. If we get a few pieces of weaker weapons or armor, we can combine them in the Forge to create a better item. However, it costs a certain amount of money. 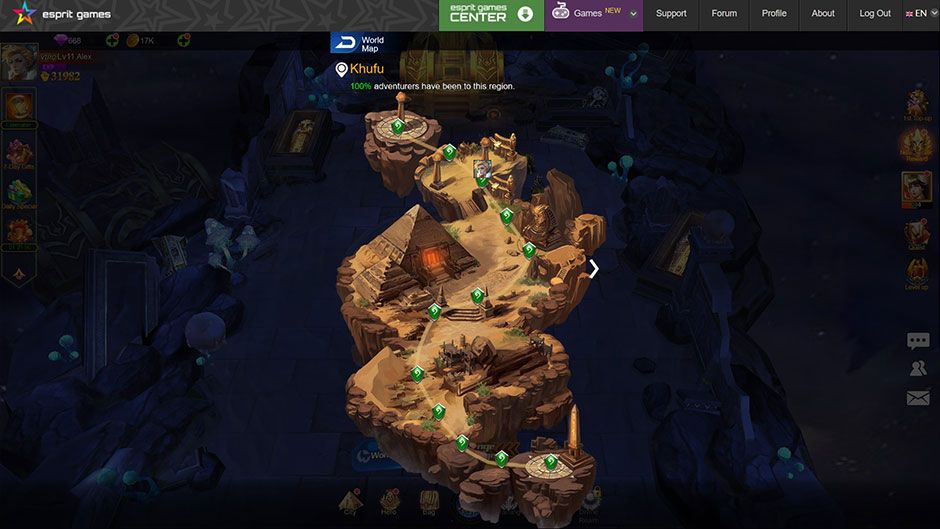 Another type of reward is food. It is used to send our heroes on expeditions. When we decide to do so, they are on the mission for some time (although they can still take part in battles), and when they return, they will provide valuable items.

As part of the reward, we can also receive various utility items, types of currency that are useful in various situations or the so-called fragments of heroes. The latter are of particular interest. After collecting the appropriate number of one type, we can summon the hero assigned to them. Fragments can also be obtained in the building of the elements for the so-called Heart of the Elements. Random types cost less, and specific types cost much more.

We can also summon new heroes in the Summoning Hall. It's free once a day. Later we have to use the so-called Summon tickets or the premium currency, i.e. purple diamonds. We can get small amounts just by playing the title, but we can get large amounts by spending real money. It is useful not only for redundant summoning, but also for exchanging for gold and other types of money, buying useful items in the store or obtaining subsequent VIP status levels that guarantee various bonuses.

It is worth noting that excess heroes can be easily exchanged for valuable items, such as crystals needed for promotion. In addition, if we have more than one character of the same type, we can combine them, thus gaining a stronger warrior. 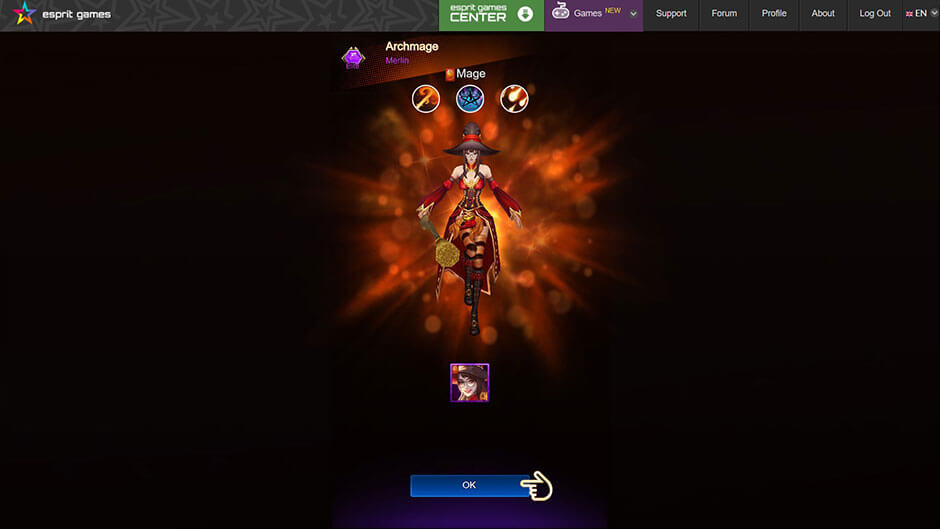 Collecting an increasingly powerful team of heroes is necessary not only to overcome the next level in, let's call it, the "main story". There are also various challenges in the game, such as the Eternal Abyss consisting of a number of levels or Lamp Bosses. Defeating them is of course rewarded. In addition, in the title, you can compete with other players or join them in guilds to fight together or even help each other in gaining new heroes.

Dark Genesis boasts colorful, three-dimensional graphics. First of all, you may like the various effects that accompany the skill. The musical setting is also pleasant, kept in a fantasy atmosphere. Interestingly, there are some songs in it that some players should easily recognize.

Dark Genesis is therefore a game that may appeal to people who do not necessarily want to play something that takes a lot of time, but want a production in a fantasy atmosphere. The gameplay in the title is fast, rewarding and not too complicated, but it also requires a bit of situational analysis. All in all, it is certainly a production worthy of attention.