Enjoyed The Legend of Zelda: Breath of the Wild? Want to dive into a colorful fantasy world full of adventures? If so, then definitely try Genshin Impact – a game with a rich storyline, vivid characters and a slew of activities that can be completed alone or with enemies via co-op.

Genshin Impact is an open-world action RPG created by a Chinese studio called MiHoYo. We learn the story of the protagonist, roaming the stars alongside their twin sister or brother (opposite to the gender you chose) and eventually coming to the magical world called Teyvat, where they’re attacked by a mysterious deity, who holds one of them hostage, voids the other one of powers and sends him or her down to the planet. The stage is thus set for a grand adventure that will have your avatar fight to liberate their sibling. The journey is perilous, full of dangers, such as the vicious dragon Stormterror. Fortunately, we’ll be aided by friends, among them the Knights of Favonius. 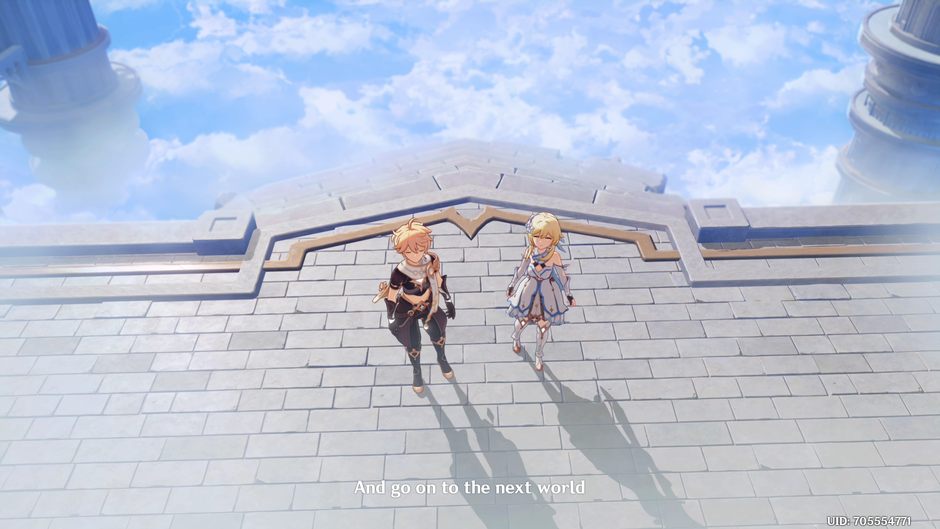 The mainstay of Genshin Impact is exploration of the colorful land full of cities, ruins, magic and all sorts of obstacles. It’s divided into regions, different in terms of environment, culture, and values adhered to by their inhabitants. Subsequent fragments of the map are revealed using the Statues of the Seven. Once activated, they can be used for teleportation, healing, and enhancements bought for sacrifice.

Waypoints facilitate travel: they’re scattered across the land, and similarly as the Statues, they have to be activated before they can be used for fast travel. 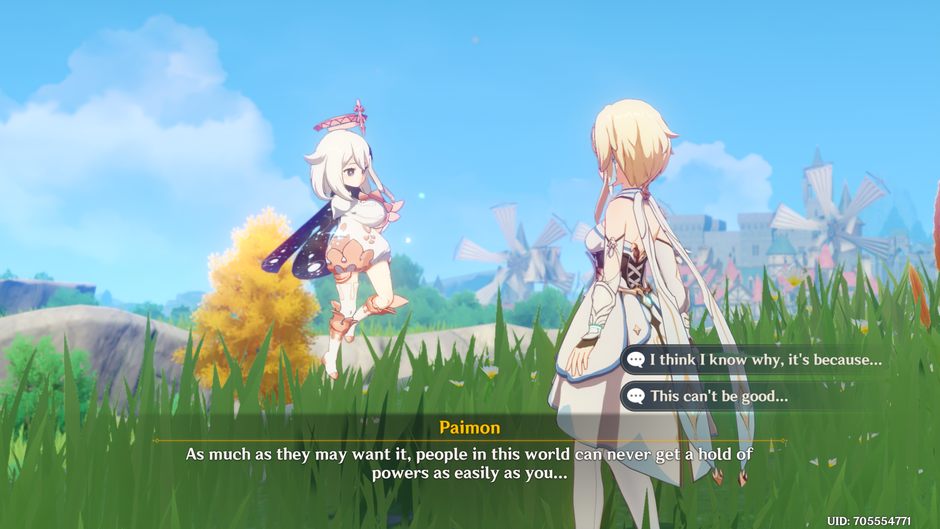 During our adventures we can find treasures hidden in chests and books containing descriptions of the universe, collect raw materials and ingredients, and fight against various opponents. Clashes can be very diverse and one of the key roles is played by different elements such as wind, fire, ice, etc. We can use them to inflict more damage on specific types of enemies or to impact particular parts of the environment. Interesting examples of using the elements can be freezing enemies or burning their shields. 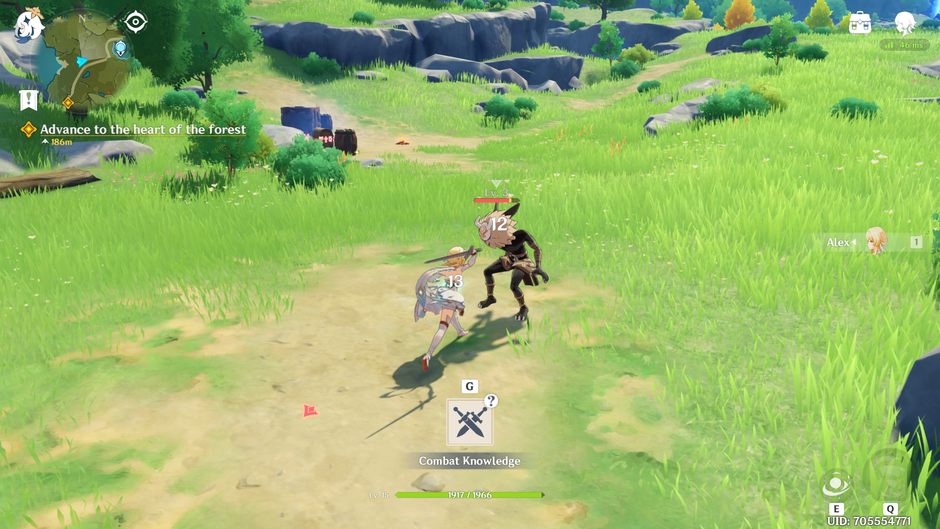 Of course, the elements react with each other. For example, the power of nature combined with fire makes it possible for enemies to set themselves on fire and get damage per second. Individual dependencies can be used not only during clashes, but also when overcoming obstacles or solving logical puzzles. Ice will be used to create a passage through water or to freeze flamethrowers.

How do we know that some objects can be affected by a given element? During the game, there’s an option to activate a special vision. After it is activated, elements susceptible to different forces are highlighted.

The elements manifest themselves in different ways. They can be triggered by weapons and special abilities. There are also powerful attacks that deal great damage to several opponents, but they have to be charged by killing enemies. 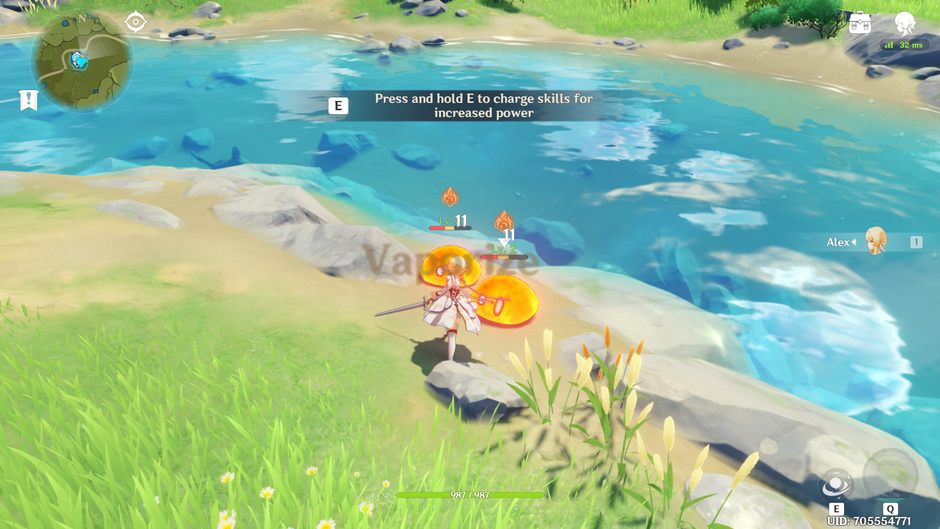 Our protagonist can change the controlled element by touching the Statue of The Seven in the right region. However, sometimes we may need to use several different forces at a time. At this point, comrades enter the stage. We can meet them during our adventures or get them thanks to so called Wishes. Each of them uses different weapons and elements and has individual skills. So, we have, among others, an archer controlling the fire, a knight freezing everything around, or a sorceress throwing electricity. During the game in the team we are able to have up to four people, between whom we can switch almost at any time. 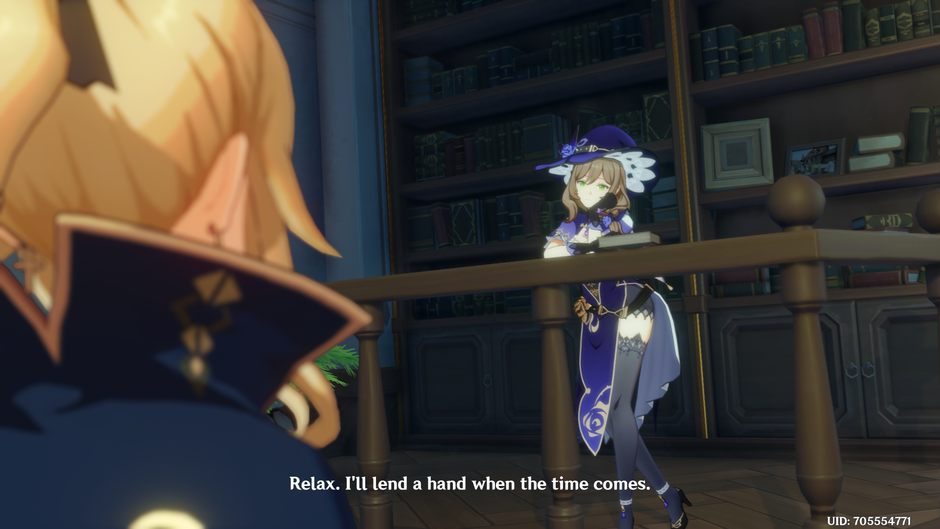 In Genshin Impact we can move on foot (walking, running or sprinting, which exhausts the strength belt) or using the so-called Wind Glaiders. These are wings that allow the heroes to glide for a short time. To use them, you have to fall from a high height and press the button responsible for jumping.

During the journey, the heroes often have to climb as well. This mechanics works in a very simple way. All you have to do is approach the vertical surface and the character should automatically start climbing. However, you have to be careful, because every moment spent on the wall or rocks reduces the level of strength. When it drops to zero, the character will fall. 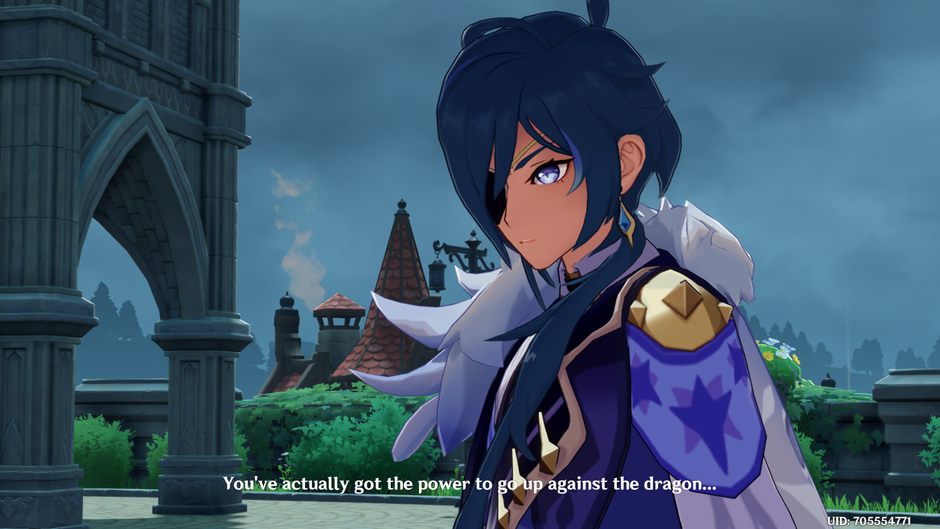 During the adventure in Genshin Impact, the characters we control often get hurt. When this happens, their health can be restored through food. During the adventure, we will find some edible ingredients scattered around the map, which can then be combined into tasty meals. We do this with special kettles through a simple minigame. The more complex the dish, the more healthful our character will regain after eating it. Snacks can also renew strength, temporarily increase defense or attack, etc.

There are also mixtures that can be brewed with special, magical ingredients, and will protect you from elements. 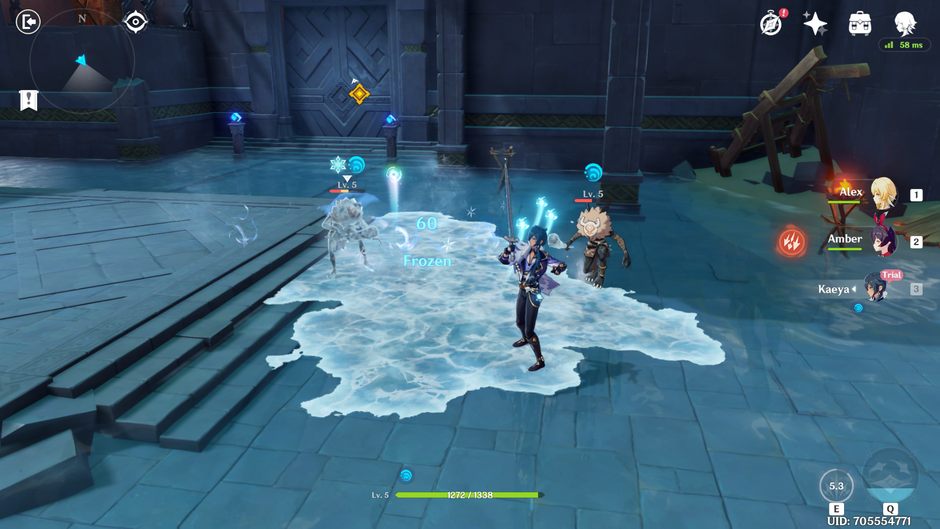 As befits an RPG, in Genshin Impact we are promoted to the next levels of experience, which in turn translates into increased statistics. We can do this by killing monsters. However, this is quite a slow way. A faster way to collect the required number of experience points for the next promotion is to use special items. These are the so-called Wanderer's Advice, Adventurer's Experience and Hero's Wit. We receive them as a reward for performing subsequent tasks and challenges. They are able to instantly advance your character to a higher level.

There are also Adventure Ranks at Genshin Impact. We gain them by performing various activities. Subsequent promotions guarantee us different prizes and unlock various new elements of fun. Moreover, reaching specific levels raises the so-called World Level. On the one hand it strengthens monsters, but on the other hand it makes us gain better loot. 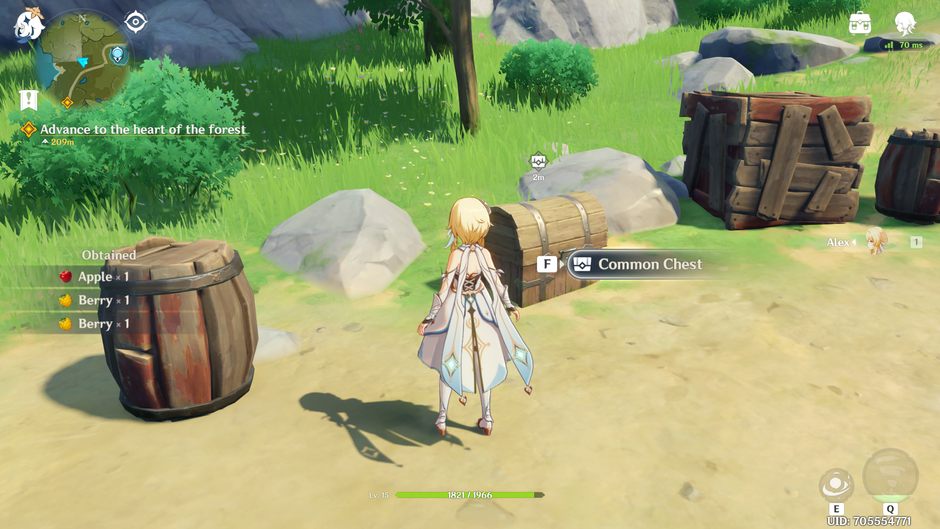 In fights with enemies we are helped not only by higher and higher character statistics, but also by weapons. In Genshin Impact there are plenty of them - from one- and two-handed weapons, through bows, to mages' grimaces. Better fighting tools can be found during the adventure. There is also an option to improve the weapons we already have.

We can also equip our heroes with special artifacts. There are five types of artifacts. Each of them guarantees bonuses to different statistics. What is important, we can also improve them.

If we don't want to look for new weapons or materials, we can always buy them from sellers located in cities. However, you have to spend a sufficient amount of gold coins acquired during the game.

There are role-playing tasks in Genshin Impact, but of course these are not the only activities in which players can participate. There are also various challenges, instances (so-called Abyssal Domains) etc. Most of them can be done either alone or in co-op mode for up to four people. 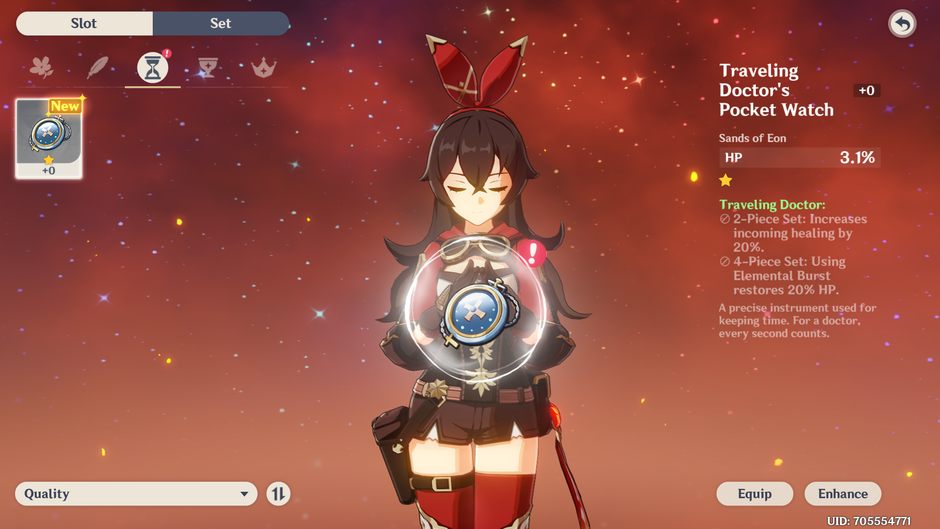 Genshin Impact is a free-to-play game and like most of the productions of this type has a micropayment system. For real money we can buy digital currency - Genesis Crystal. We can exchange it for another currency, so called Primogamy (there is also a chance to get it simply during the game, for example through various achievements), which in turn serves for a variety of things - from quicker regeneration of Original Resin, necessary to gain rewards for participation in activities, to gaining funds to buy Wish - local boxes where we can find new weapons, characters etc.

In Genshin Impact we can also get a Monthly Card for real cash, thanks to which we will receive 90 Primogs every day for a month. There is also a Battle Pass on sale for dollars. It works similarly to the items from other games. After gaining it you can carry out various missions, which are rewarded with attractive fantasies. 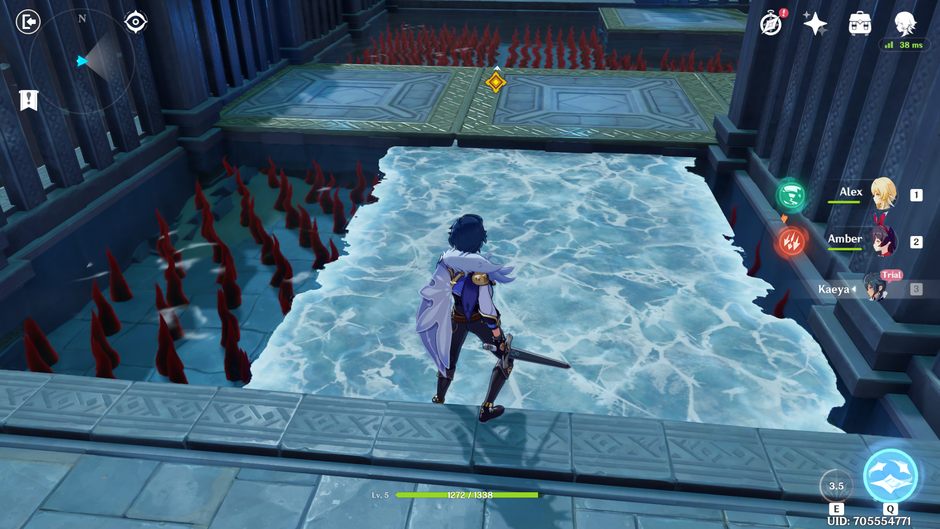 To sum up, if you want to experience an extraordinary adventure in a magical world in the style of The Legend of Zelda: Breath of the Wild, Genshin Impact should be a game for you. Quite an interesting story in manga/anime aesthetics, and a lot of content should provide hours of fun. It’s also worth noting that the team from MiHoYo studio is constantly adding new elements to the game, so it should remain alive for some time.

Here’s a few tips for beginning: