Game of Thrones:Winter is Coming is first official strategy game based on the series created by George R.R. Martin. Game combines best elements of strategy and RPG titles, and is available completely for free, in either browser or client-based version! All of that presented with known and liked characters from the series, featuring also castles and regions as shown in the fantasy tv show. This is must play for the fans of show and books!

When you first enter the game, you'll see a well-known character, the "red woman," Melisandre. She's important to the story in the game and will introduce you to it. She'll also help you during the tutorial. Interestingly, the tutorial is actually an integral part of the initial stages of the story; completing it is mandatory. Do not fret, though! The tutorial isn't a boring lesson, as it takes you right away to present the game's main mechanics. There, you will learn that expanding the castle is the fundamental mechanic, as well as how to build an army, wage war, and provide the kingdom with resources. And since we're talking about the kingdom (or rather kingdoms), these are all locations that are well known from the series. We begin the journey in the Kings Landing, to gradually conquer other lands of the Seven Kingdoms. The game's plot will unfold immediately after the death of Ned Stark, which began the bloody power struggle, i.e. the Game of Throne of Westeros. The main thread of the production will feature other famous characters: Cersei and Jamie Lannister, Varys, Jon Snow, as well as the dragon queen Daenerys and many, many others. 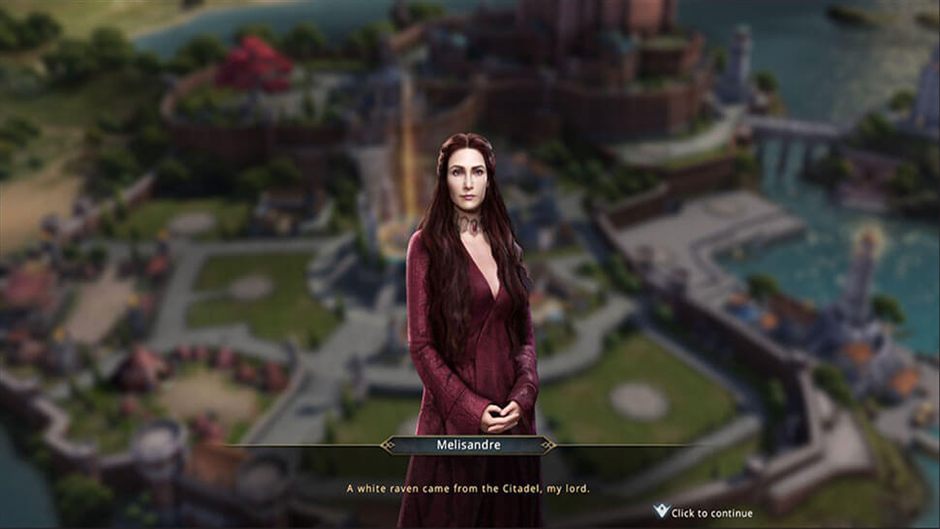 The core of the gameplay will be – as I mentioned – the expansion and strengthening of your castle. This aspect is known from other strategy games. To achieve prosperity, we will have to build new facilities, as well as take care of the development of the already created buildings. These include the castle itself, barracks, hospital, sept, forge, sawmill and farm. And this, of course, is only part of the available infrastructure. To expand our holdings, we will naturally need raw materials: grain, wood, stone, iron, gold, and diamonds. The magnitude of the development options can be intimidating to a new player, but the developers have thought about this issue and have implemented an interesting solution that helps new players to optimize their progress. These are the quests, which (after the tutorial) will determine the direction the game follows. Tasks are divided into separate sub-categories, such as

Completing them will allow us to move forward not only the plot of the game but also (until we learn to do it ourselves) the expansion of King's Landing. 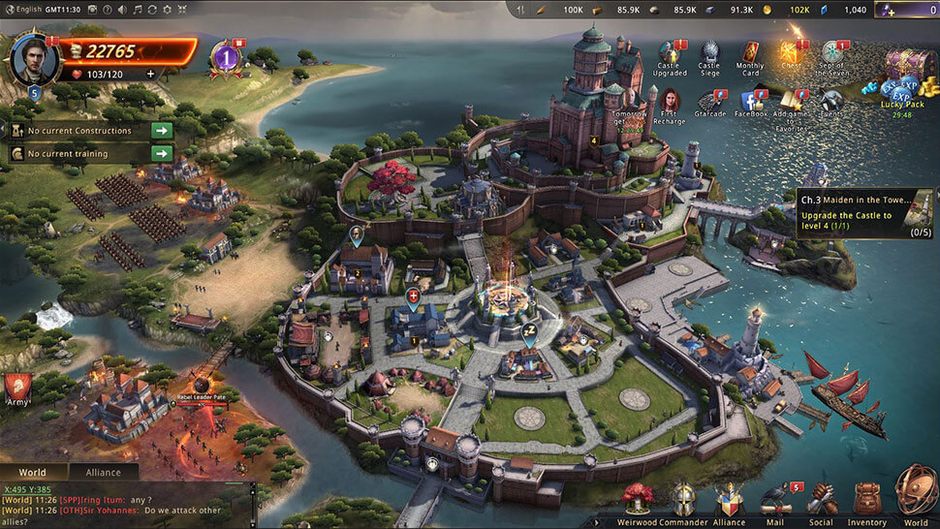 The modernization of the army is, of course, an equally important element of this strategic game. From the first stages of the game, we will be forced to create their military power that the game itself strongly emphasizes in the textbook and subsequent quests. In addition to the acquisition of basic units (archers, spearmen, cavalry, etc.) we also can recruit... leaders. The development of the leaders will be a separate, essential mechanic. We will take care not only of their experience levels but also develop skills by increasing their power. Successes in the fields of the following battles will also provide us with rewards that we will access as the ruler. Inventory - because that's where we find our loot - is a cache for obtained special-purpose items, unused raw materials, looted after battles, as well as boosters and treasure boxes. 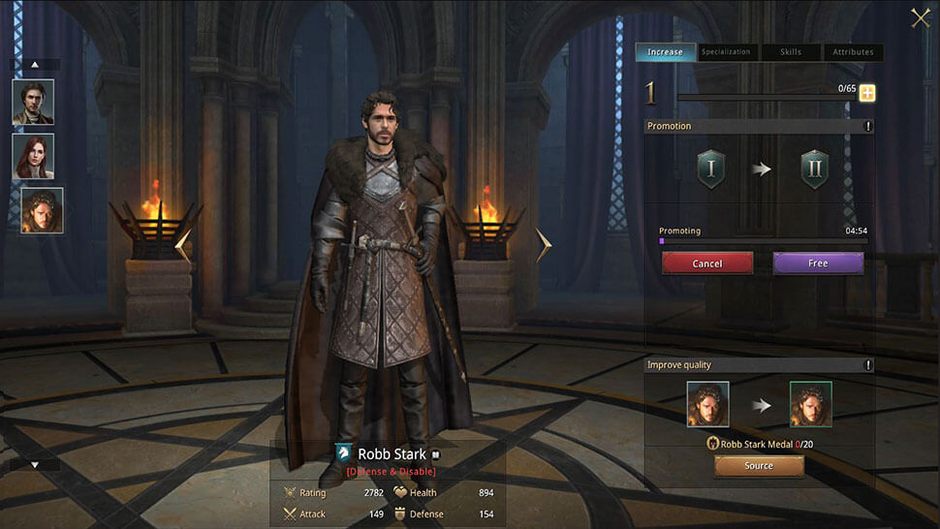 The developed army and its leaders will be used in combat, so it is worth saying a few words about it. Fighting will be an aspect that will certainly appeal to all lovers of tactics and spectacular fights. Combat takes place on several plains: taking part in instantiated clashes in the main thread (which is divided into regular fights and much more difficult elite clashes), defeating the enemies at our castle gates, and conquering the lands of other players, which we'll discuss in more detail later. It is worth knowing that although the game itself is strongly strategic, the battles are still very dynamic. Success will depend not only on the size of our army and the degree of development of commanders but also on the effectiveness of the deployment of armies (since each commander has a different impact on specific units) and the tactical use of superpowers of our units. These mechanics make subsequent battles entirely unique and unpredictable. 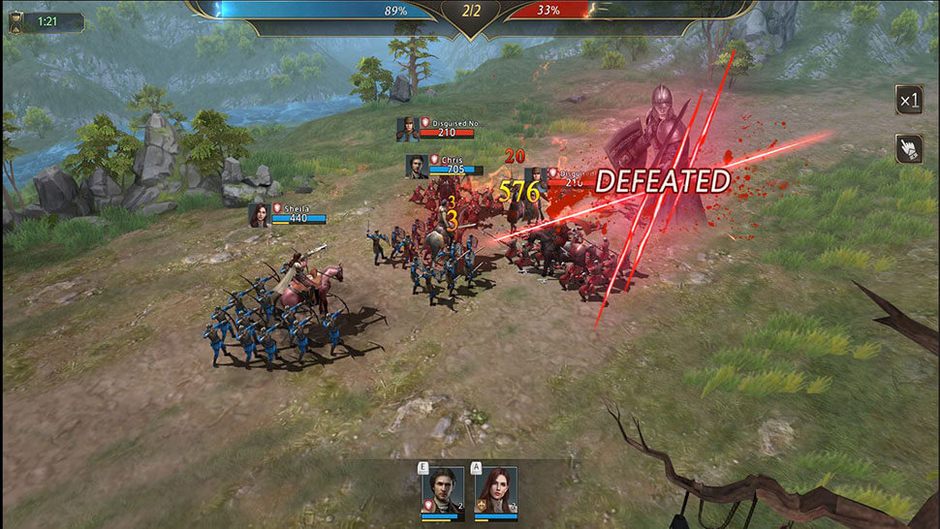 Game of Thrones: Winter is Coming is an online game, so players will find plenty of activities. First, joining an alliance with other players will be crucial, which should be a very logical solution for all fans of the series, who know that without the help of other families (in this case, players), our chances of capturing the throne are slim. An alliance is not only a banner and an empty tab in the game menu. It provides a lot of interesting traits. Players linked by an alliance can help expand their castles, wage wars together, and pass on valuable gifts. The strength of the alliance is an important issue. The game is heavily based on PvP battles with other players, so it's important to have the support of other, powerful lords. The stronger the Alliance, the more chances to dominate the map! The game also offers classic social features such as chat and discussions, which can be a temporary escape from the gameplay, allowing to talk about the latest episodes of your favorite series, for instance. 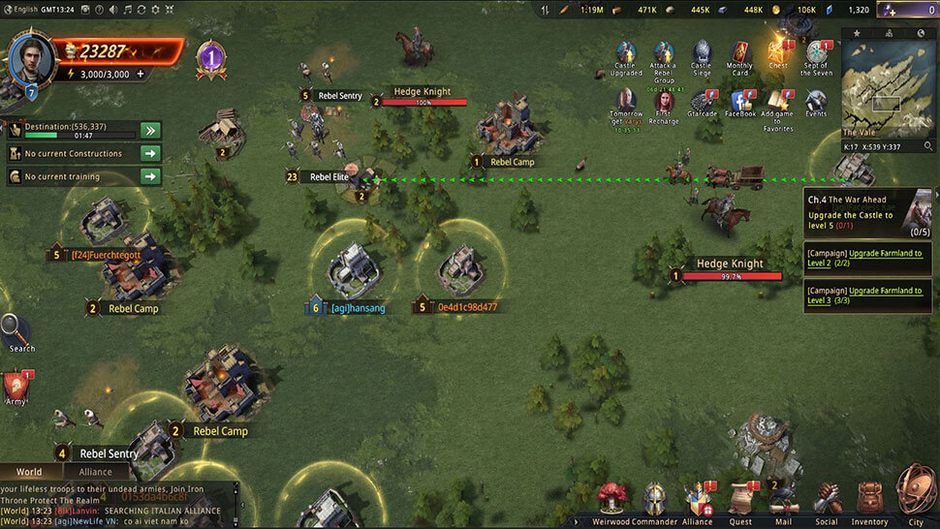 The computer adaptation of "Game of Thrones" is completely free, so literally everyone can enjoy it. As in the case of other free-to-play productions, we can find here the premium store along with a premium currency – Black Diamonds. The options offered by the store are mainly boosters that speed up the progress, as well as small cosmetic additions to our account. All offered "goods" are completely optional, which means that no player is forced to buy them to fully enjoy the gameplay. Of course, getting to the top of the leaderboard becomes a little easier, however, with a little patience, as well as a good sense of tactics and strategy, free players can compete with paid ones without problems. In addition, the developers have prepared a number of activities that will earn you currency almost equal to the premium currency, that is, ordinary diamonds. These actions include earning achievements, performing complex missions, winning single battles in good style (for which we will earn level progress stars), as well as logging into the game daily! 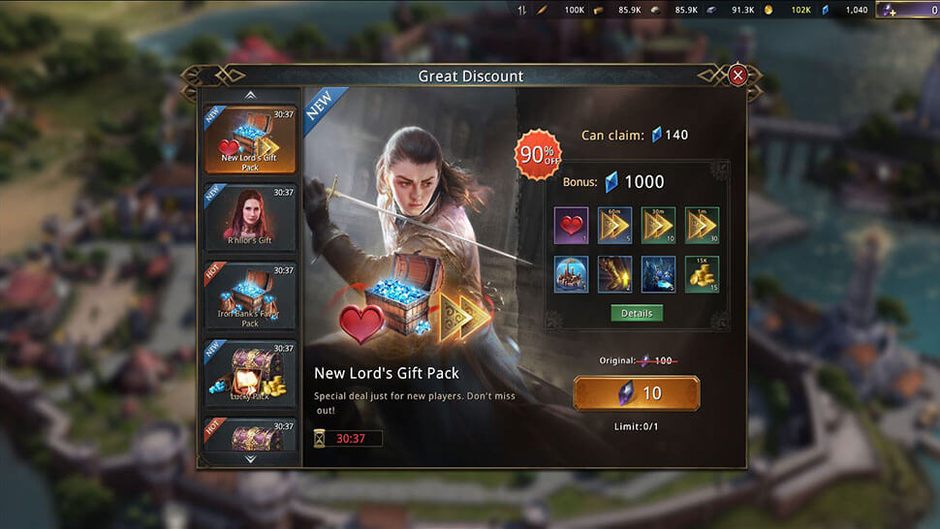 In conclusion – Game of Thrones: Winter is Coming is the first such large-scale production in the universe created by George R. R. Martin. This is a strategy game enhanced with a number of RPG elements that make both fans of both genres feel at home. An interesting story, well-known characters, compelling mechanics, as well as the intense combat, are certainly factors that assert the quality of this name. And all this is available both in browsers and in a desktop client of the publisher – GTArcade. The position is a must for all fans of the Game of Thrones series and novels from the Songs of Ice and Fire series! We certainly recommend it.

Some good advice for the future rulers of Westeros: