Lead your nation to victory!

Is there a player in the world who has never heard about "Travian"? Probably not, because we're talking about one of the most popular browser strategies in gaming history! If you have wondered what happened to this production over the years, or you however do not know what Travian actually is (or were) - you will find the answer here!

But why “Legends”? Let me explain: through the next patches Travian has grown to the point that it has become almost a new game. That's why the developers decided that from version 4.4. the game will be known as Travian Legends. Of course, this is not a cosmetic procedure. Old Travian veterans would probably be surprised if after years they visited - already refreshed - version of this title! The number of changes from the original is really impressive. Nevertheless, the key aspects of production remained the same. It is still a strategic browser game based on economic mechanics. 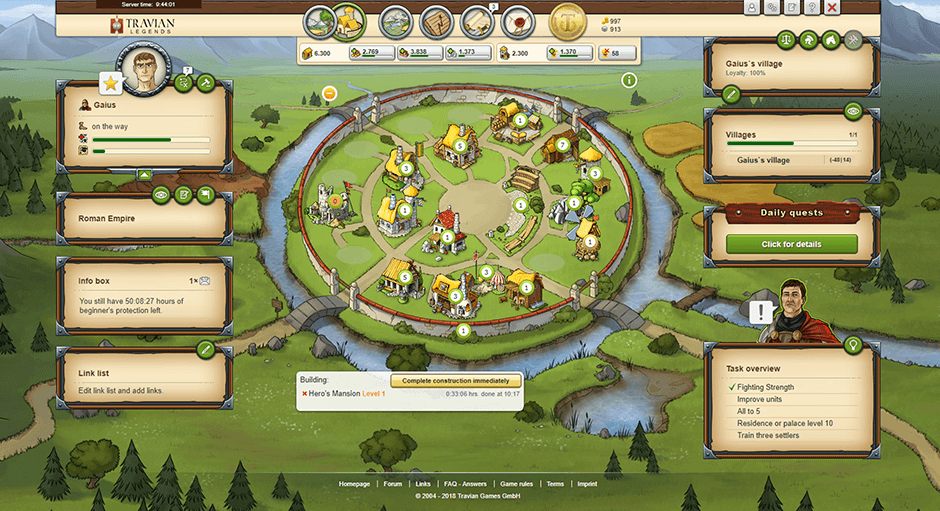 If you are a new player - you have nothing to fear. Travian Legends is a game for everyone, not only for veterans of strategic games. At the very beginning, the production will put us in front of several choices, including what kind of tribe we want to guide and where on the map our settlement will be located. To better introduce us to the world and gameplay mechanics, the developers have prepared a very intuitive, non-invasive tutorial. It's not necessary to go through it, but it’s recommended, because it will help us understand the basics. 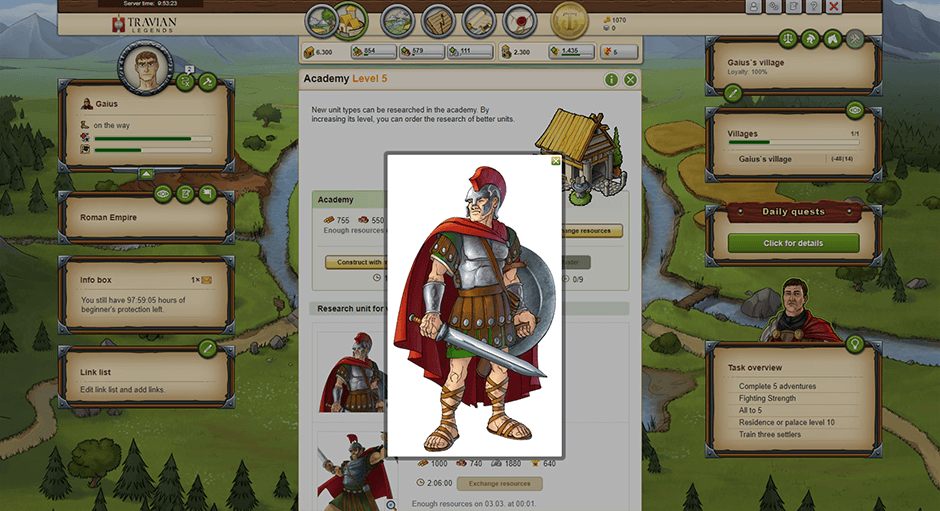 Once we pass (or skip) the tutorial, game will throw us straight into the action of creating our empire. We will be moving through the menu, which includes the following tabs: Sources, Settlement Center, Map, Statistics, Reports, News and Gold, but we will talk about those a bit later. Beside them we have Character, Challenges, Auction and Daily Tasks tabs which are equally important. 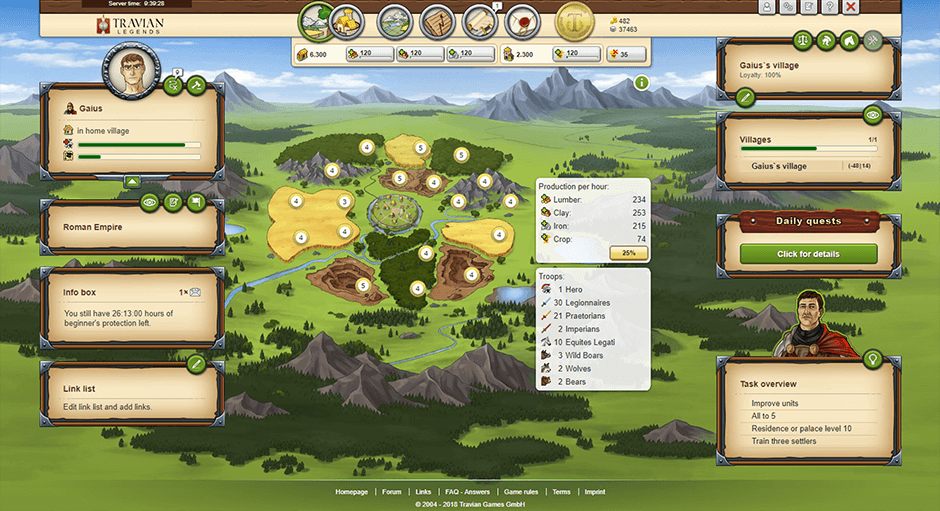 Speaking of "Character" I mean avatar who will be our alterego to lead village to power. Interestingly, the game allows us to change its appearance. Travian also offers a mechanic known best from RPGs – we can customize our hero in few ways like equipping new items, adding statistics, deciding whether he will stay on the battlefield, or whether he will run to his hideout during the siege and others. This is a very interesting feature that additionally diversifies the game. 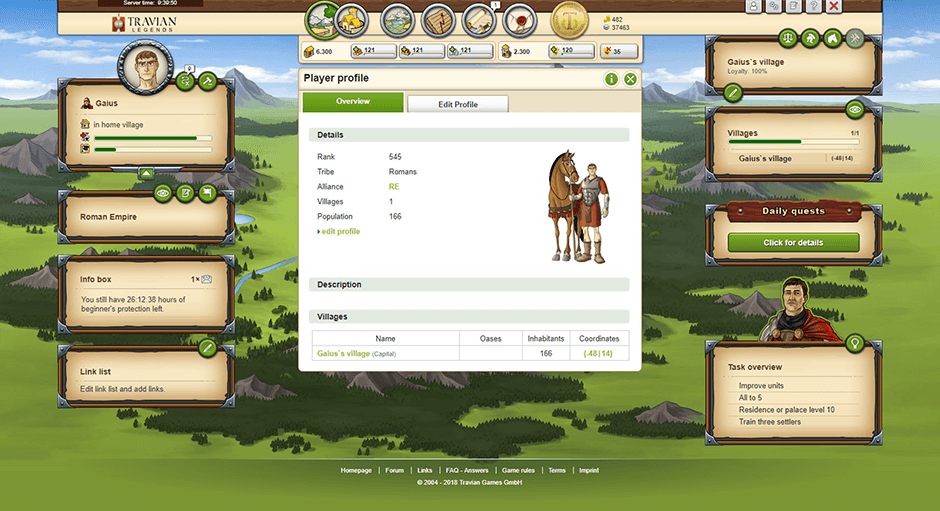 However, still the key features of the game are - as I mentioned - the economy and strategy aspects: expanding our village, the acquisition of resources, the selection of buildings in the center of the settlement, military management, alliances and uttering wars. These things are crucial in Travian Legends. To build empire, therefore, we must demonstrate a perfect strategic sense. Managing so many different elements is not the simplest thing. 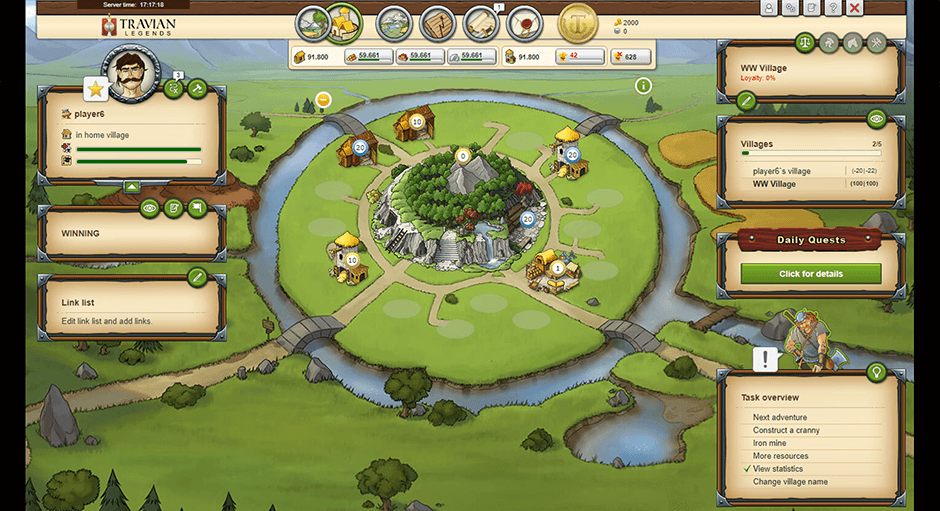 In addition to the building and getting resources, it is worth constantly doing the adventures offered by the game and regularly visiting the auction house. The auction house is a place where (as the name suggests) we bid for valuable items for our hero. They increase the statistics of the avatar, and hence - efficiency on the battlefield. It is worth following interesting auctions and upgrading your inventory as much as possible. 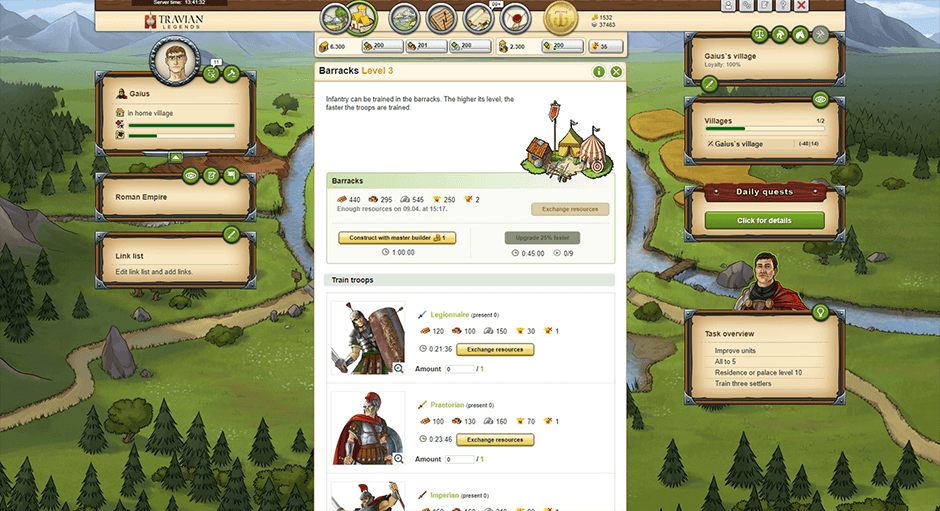 The game offers a system of daily tasks well known from similar productions. Their completion allows you to get special points, which are then exchanged for very valuable prizes - resources, hero experience and cultural points. These awards will definitely speed up the development of our village. 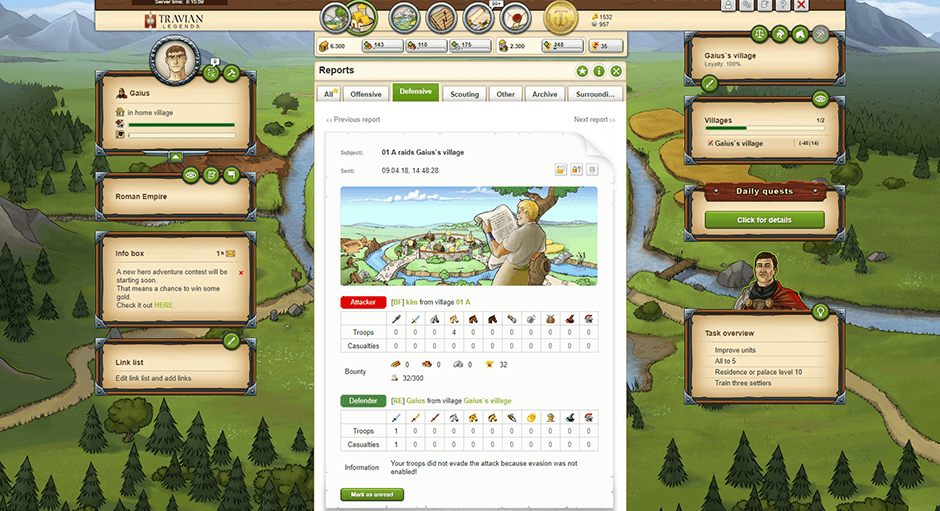 Due to the Free2Play model chosen by the producers, we have premium currency - called Golden Coins – here. Of course, it facilitates the game speeding up a lot of things - the speed of building, gathering resources bonuses and a few more. However, there is no Pay2Win. With a little patience and free time, we can do achieve everything without paying even a penny. On the other hand it is worth knowing, that if we think about a game focused on competing with other players, spending real money will be a must. 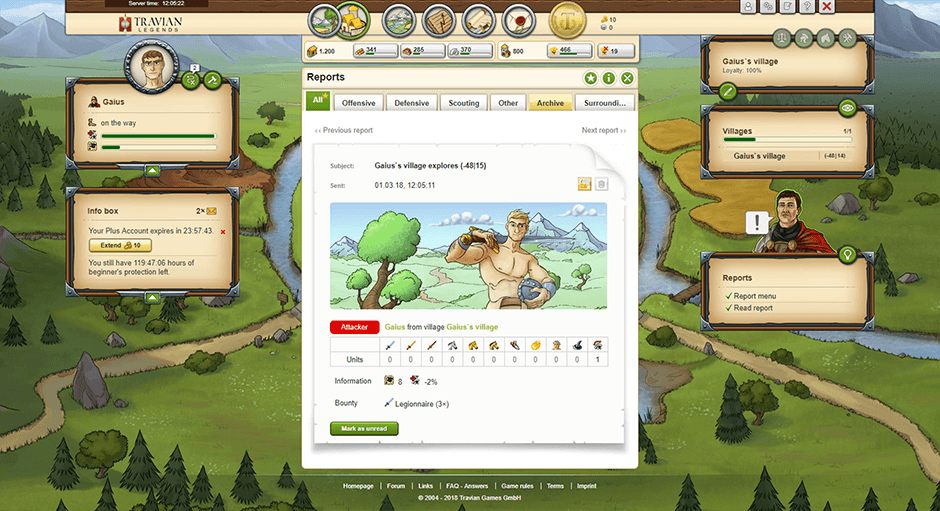 Travian Legends is a well-known classic in a refreshed form. Everyone who likes economic and strategic games should be really satisfied with this production. Addictive gameplay, interesting mechanics, pleasing graphics and PVP aspect make the game an excellent position for hours and hours of fun. If you want to lead your empire, be sure to check Travian Legends and see what kind of commander you are!

Few tips for the beginners: