The Earth is uninhabitable. Humanity led by five mega-corporations moved to Mars. They are constantly competing for resources and artifacts that remain on the old planet. They use pilots who conduct huge walking robots - play as one of them, develop your machines and lead dynamic duels with other players from around the world.

War Robots is a multiplayer TPP shooter developed by Pixonic studio, available on PC and mobile devices with Android and iOS systems. Its plot begins in the relatively near future. At the end of the 21st century, the Earth was struck by a cataclysm that made the planet uninhabitable. Fortunately, however, five mega-corporations have found a plan to save humanity. They began the colonization of Mars. Thus, five separate human factions arose. Decades later, in the year 2142 to be precise, the Red Planet is a bastion of peace and development. This does not mean, however, that there are no tensions between individual corporations and their supporters. The fight between them continues over the resources and artifacts left on Earth. The war for them is fought by the pilots who control the powerful walking robots known as mechs. These are the people that players play as. 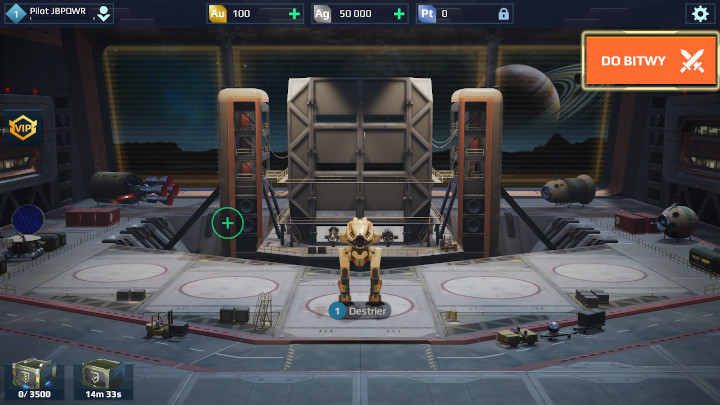 War Robots battles take place on twelve maps, maintained in the climates of different regions in the world (we have a Rome board inspired by Rome or Shenzhen, reproducing a fragment of this Chinese city), and even outside it (the game includes an arena located on the moon). There are several different game modes in the title. Here they are: 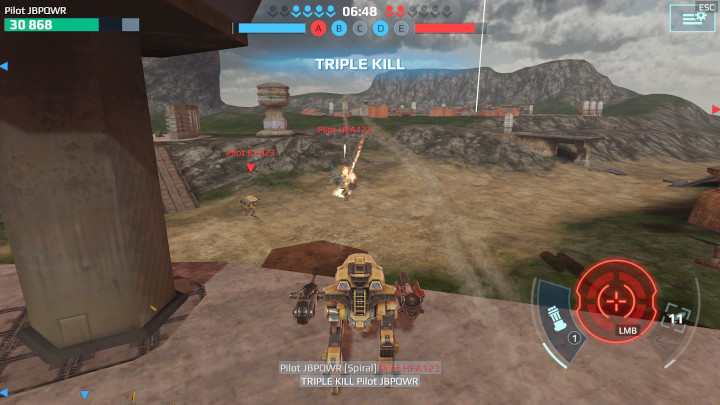 Robots are the absolute heart of War Robots. Their proper selection and preparation for battle often determines victory or death on the battlefield. There are several types of them in the title. First of all, they are divided by weight. Light robots are fast, but they can't boast too good weapons and armor. Medium-sized robots try to maintain a balance between these three elements, without standing out in any of them. The heavy ones, on the other hand, have very durable armor and great firepower, but they do not sin with speed. In addition, they are larger and easier to hit.

A separate category are Titans, powerful machines that can boast of really good statistics. However, they cannot be used at the beginning of the match. To activate them, it is necessary to fill a special bar. We do this by dealing damage, healing ourselves and our companions, and capturing control points.

The weapons present in War Robots are also divided into several classes. We have light, medium, heavy beta and alpha weapons. The way they are marked indicates which slot on our machine we can place them in. It also tells us how much firepower they are able to offer.

Offensive measures can also be divided according to the type of missiles. We find miniguns that spew out a series of rounds very quickly, rocket launchers that deal a lot of damage or weapons that eject energy beams. They are effective against various positions of the opponent's robots, so you should think about going into battle with the most varied equipment. 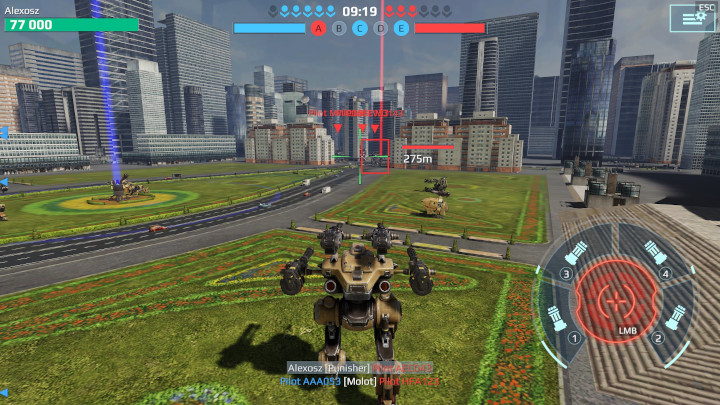 During the fight between the various types of weapons that we have installed on our robot, we switch using the keys 1-4. It is worth doing this especially when we see that one weapon is running out of ammunition (fortunately, it is infinite, we only need to wait a moment for it to regenerate).

Both individual weapons and the robots themselves can be improved, thus increasing their combat usefulness. However, we have to spend silver on it. It is a reward for participating and winning matches. We can also get them by completing daily and periodic tasks, the status of which is visible in the main menu of the game.

We can also spend silver on buying new weapons and robots, which we can later use during fights. We unlock options for acquiring more and more powerful ones by gaining new levels of experience. In turn, we gain "Exp", as well as currency, by taking part in matches. 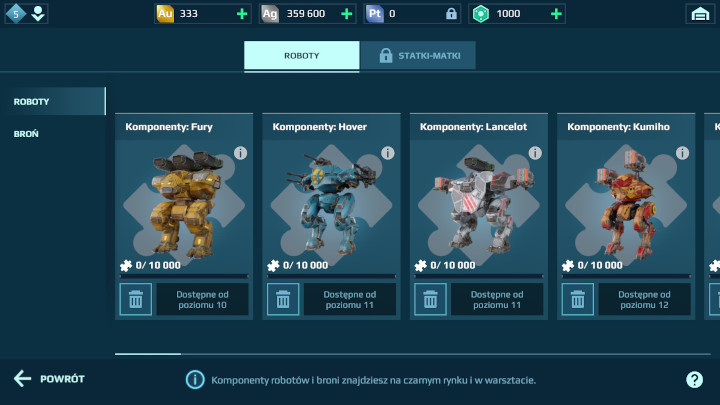 Finally, silver is also required to unlock a second hangar slot (out of a maximum of four). Why are they important? Well, only from among the robots located in these places, we can choose the one that we lead to fight at a given moment in the match. Therefore, in this case, it is also worth thinking about ensuring the greatest possible variety.

However, silver is not the only currency present in War Robots. Another is a variety of wrenches. Their appropriate amounts are used to open special chests in which we can find, for example, new robots and weapons, larger amounts of silver or components. We can get keys, for example, by coping perfectly during battles and by taking the top places on the list of the most effective players.

These components are another type of currency in War Robots. Collecting them allows you to unlock the possibility of buying more machines.

Next we have power cells. They are used to activate special modules that we can place on our robots, thus guaranteeing them special abilities (for example, the option of regaining stamina or detecting hidden enemies for a few seconds). This currency can be found, for example, in the chests described above. 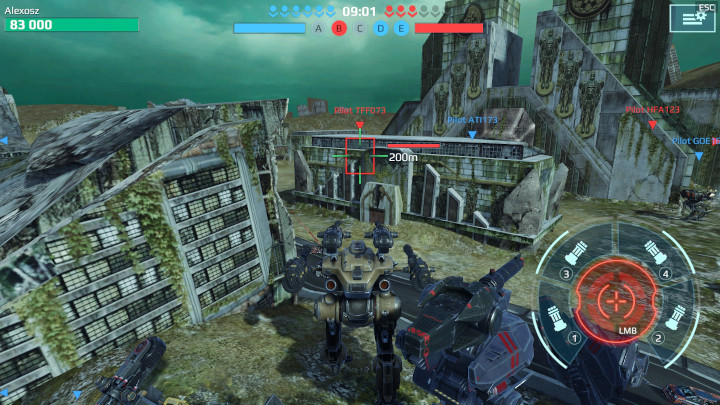 Next is platinum. It is necessary to upgrade the Titans and buy items related to them. Some amounts are in chests and act as rewards for completing daily tasks.

After all, there is gold in War Robots. There is a kind of premium currency. We can get it as part of the game (by completing missions daily or by reporting to the top of the list of the best players in a given match), but its source is primarily the real money we invested in the title. For gold, we can buy more places in the hangar, some types of robots and weapons for them, other types of currencies, pilots that guarantee various bonuses, etc. It also serves, for example, to speed up the improvement process.

It is also worth noting that there are also special tokens in War Robots, which are given out for participating in special events. For them, we buy special boxes with unique content, access to which is sometimes limited in time. 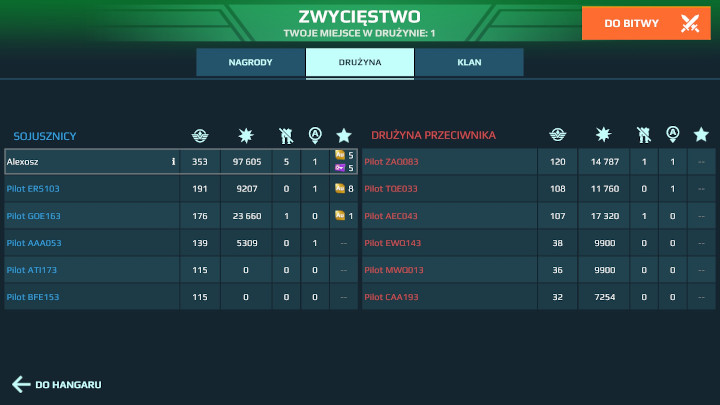 We already have properly prepared robots and we know the basics, so we can move on to conquer the ranking ladder. All players in War Robots are divided into several leagues where they find themselves with people of similar skill level and equipment development. The better we do in the next matches, the faster we climb up the next positions. In the end, we will get a chance to be promoted to the next league, which is rewarded with a certain amount of gold.

To make it a bit easier to advance to the next levels, players can form clans. In order to agree to one, usually everyone who is willing must undergo appropriate verification. However, it is worth doing and then participating regularly, because with companions it is easier to get more powerful equipment.

The graphics in War Robots are quite simple. Its undoubted advantage, however, is that it is very legible. You can especially like the special effects accompanying the missiles fired and the destruction of robots. As for music, it is kept in a science-fiction atmosphere and is able to properly set the players to the battle. 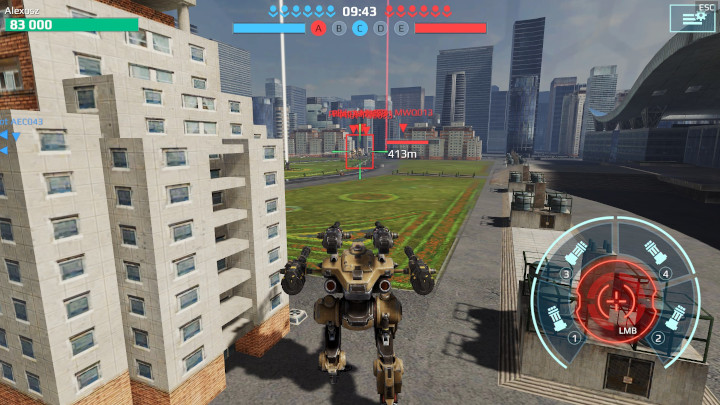 All in all, War Robots is a very enjoyable third-person shooter that should appeal to those who like to shoot each other virtually. At the same time, it is so uncomplicated that even beginners in this genre can derive satisfaction from subsequent clashes. When we add the fact that matches don't last very long, we can define War Robots as the perfect position for a few moments of relaxation.